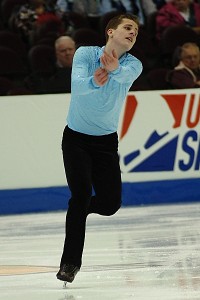 Behind a successful season that included a U.S. Championship medal in the junior men’s competition, Alexander Johnson is proud to open his official Web site at www.figureskatersonline.com/alexanderjohnson/.

Johnson, who trains in Edina, Minn., with coach Joan Orvis, won the gold medal at Junior Grand Prix Czech Republic and added a bronze with a strong skate in Great Britain. He finished sixth at the Junior Grand Prix Final.

“I would say the most defining moment in my career would be qualifying for the 2008 JGP Final in Goyang City, South Korea,” Johnson said. “Going into this past season, it was one of my top goals to make it there so when I finally qualified, it felt so rewarding to know that all the hard work and energy I had put into making it there had paid off.”

Fans can visit his site at www.figureskatersonline.com/alexanderjohnson/.