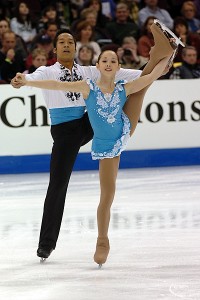 Tanovich and Chau, who are ineligible to compete on the Junior Grand Prix and Grand Prix circuits because of their ages, plan to compete as seniors in the 2009-10 season. Their goal is a top eight finish at the U.S. Championships.

Tanovich and Chau are members of the Southwest Florida Figure Skating Club who train with coaches Jim Peterson, Allison Smith and Lyndon Johnston. Among their training mates are U.S. silver medalists Caydee Denney and Jeremy Barrett as well as pewter medalists Amanda Evora and Mark Ladwig.

Fans of Tanovich and Chau can visit their Web site at www.figureskatersonline.com/tanovich-chau/.