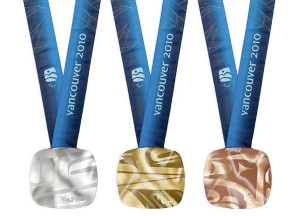 VANCOUVER, British Columbia, Canada — As unique as the world’s top athletes and their awe-inspiring performances, every medal won at the Vancouver 2010 Olympic and Paralympic Winter Games will be a one-of-a-kind work of art. The medals, revealed today, each feature a different crop of larger contemporary Aboriginal artworks and are undulating rather than flat — both firsts in Games history.

The gold, silver and bronze medals were designed with direct input from Olympic and Paralympic athletes who shared their experiences about medals they won at past Games and expressed what they would like to see in future medals. Their stories and dreams helped shape the medals, which are being produced and supplied by Vancouver 2010 official supporters the Royal Canadian Mint and Canadian mining and metals giant Teck Resources Limited, in collaboration with the Vancouver Organizing Committee for the 2010 Olympic and Paralympic Winter Games (VANOC).

“An Olympic or Paralympic medal is a cherished possession for every athlete — it’s what we all strive for when we train and compete,” said Jill Bakken, an Olympic gold medalist for the United States in bobsleigh at the Salt Lake 2002 Olympic Winter Games. “To feel it being placed around your neck on the podium or seeing children’s eyes light up when you show it to them are experiences that defy words. Seeing these beautiful medals today makes me wish I was competing again in 2010.”

Daniel Wesley, a five-time Paralympian and 12-time medalist for Canada in alpine skiing and wheelchair racing at the Summer and Winter Games, agreed.

“Every one of my medals has meaning and motivation because of the memories attached to them and the people I’ve been able to share them with, from family and friends to the crowds in the stadiums on those days. The 2010 Paralympic medals — and the care taken by the design team to ensure they’re equal in size to the Olympic medals yet still unique in their artwork and shape — demonstrates to me, the public and other Paralympians how greatly our accomplishments and stories are valued.”

The medals are based on two large master artworks of an orca whale (Olympic) and raven (Paralympic) by Corrine Hunt, a Canadian designer/artist of Komoyue and Tlingit heritage based in Vancouver, BC. Each of the medals has a unique hand-cropped section of the abstract art, making every medal one-of-a-kind.

For example, each medal will include its own signature elements of the orca and raven artwork, such as the suggestion of the orca’s eye, the curve of its dorsal fin, or perhaps the contours of the raven’s wing. A silk scarf printed with the master artwork will be presented to each Olympian or Paralympian with their medal enabling them to see how their medal connects with those awarded to other athletes at the Games to make the whole design.

Internationally renowned Canadian industrial designer and architect Omer Arbel, also of Vancouver, used his extensive knowledge of materials and fabrication processes to create the innovative undulating design of the medals, which are struck nine times each to achieve the distinctive look as part of the 30-step medal fabrication process. The Organizing Committee asked Hunt and Arbel to join their creative talents together on the medals project after they submitted separate designs proposals that both contained compelling elements. VANOC received 48 medal design ideas from across Canada and internationally after issuing a request for proposals in December 2007.

“The ultimate symbol of a dream come true for an athlete is an Olympic or Paralympic medal,” explained VANOC’s Chief Executive Officer John Furlong. “They are the reward for years of effort and sacrifice on the part of the athlete and have the power to inspire children and lift the spirits of an entire country.

“This two-year project has been a truly collaborative effort between inspired designers, artists and craftsmen who dedicated themselves to the challenge of finding beautiful, uniquely Canadian designs to honor the medalists and tell the stories of the Vancouver 2010 Winter Games,” he added.

The orca, designed across four panels in the style of a traditional West Coast First Nations bentwood box, is often associated with the attributes of strength, dignity and teamwork. The sleek and powerful black and white whales are common to the waters off Canada’s west coast but are also found in all the world’s oceans.

The strong black wings and proud beaked profile of the raven appear in a three-part composition in the style of a totem pole. The bird, species of which can be found around the globe, is often associated with transformation and healing abilities and represents determination, creativity and wisdom.

The full descriptions explaining the design and artwork, as found in the materials presented to the athletes with their medals, are available at www.vancouver2010.com.

In addition to the Aboriginal art, the obverse side of the medals is embossed with the Olympic Rings or Paralympic agitos, and the hand-cropped section of the orca or raven design is lasered on with a subtle wood grain effect.

On the reverse side, the medals contain the official names of the Games in English and French, the official languages of Canada and the Olympic Movement, as well as Vancouver 2010’s distinctive emblems and the name of the sport and the event the medal was awarded in. On the Paralympic medals, braille is also used. The entire medal is protected to prevent tarnishing, nicks and scratches.

The Games motto With Glowing Hearts/Des plus brillants exploits is written in white lettering on the medal’s blue and green ribbon where it will rest at the base of the neck.

The Royal Canadian Mint will produce 615 Olympic and 399 Paralympic medals at their headquarters in Ottawa, ON, for the 2010 Winter Games. They started striking the medals in July 2009 and will finish the historic task in November. The Mint also manufactured the medals for the Montreal 1976 Olympic Games.

“The Mint assembled a tremendous pool of talented engineers, engravers, dye technicians and press operators to channel decades of experience into bringing the Vancouver 2010 medals to life,” said Ian E. Bennett, president and CEO of the Royal Canadian Mint. “These medals are the pinnacle of metal fabrication and craftsmanship and worthy tributes to the athletes who will triumph here mere months from now.”

Teck Resources, a Vancouver-based diversified metals company, is supplying the metals used in the production of the Olympic and Paralympic medals. The metals are from Teck’s operations in Canada, including British Columbia, Ontario and Newfoundland and Labrador, as well as Alaska, Chile and Peru.

“Our employees worldwide are honoured to supply the metals for the medals that will be cherished by the world’s best winter athletes in 2010,” said Teck’s president and CEO, Don Lindsay. “We’re also excited that these medals will contain recycled metal recovered from end-of-life electronics, consistent with the sustainability philosophy of the Olympic and Paralympic Games.”