Next week, Ashley Wagner will compete in her tenth U.S. Championships and she has quite an outstanding track record in this event. Wagner has collected six medals at the U.S. Championships over the last nine years, three of which were gold. Ashley captured the bronze last season, but this year she has her sights set on her fourth national title.

After winning the silver medal at the 2016 World Championships, Wagner started off this season with a great amount of momentum. She won Skate America, but then came unraveled at the Cup of China where she finished in sixth place, which was her lowest Grand Prix placement in 10 years. Due to that performance, she did not qualify for the Grand Prix Final, which she had qualified for successfully since 2012. Since that event Ashley has been working to evaluate what went wrong and make the appropriate alterations in preparation for the rest of the season. 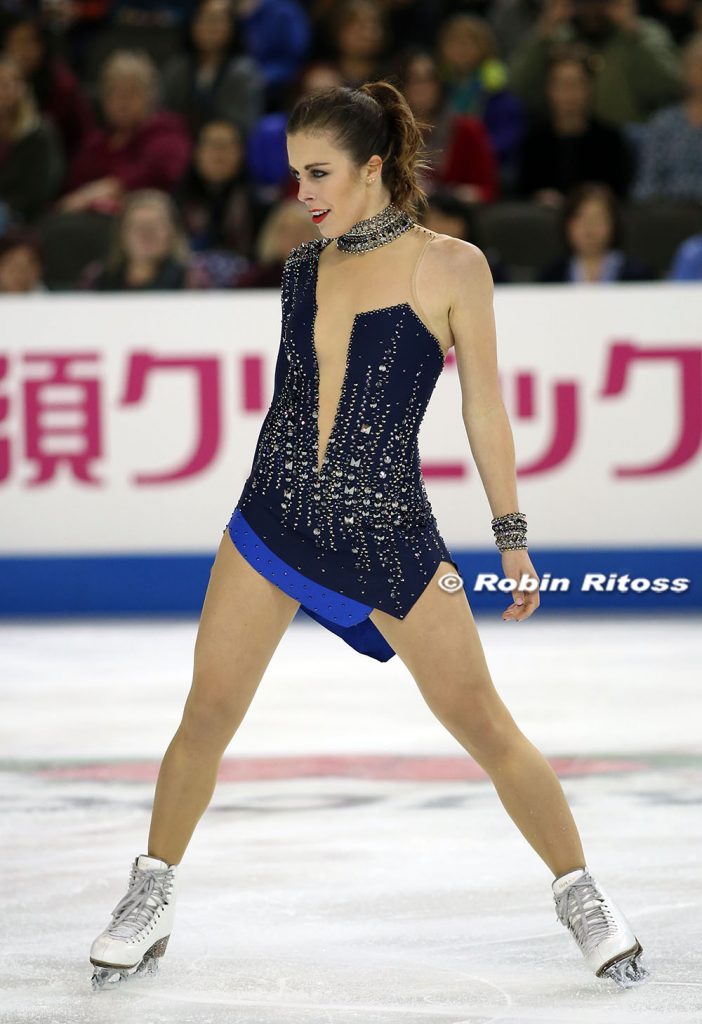 “I didn’t make the Final because I left the door wide open for Shin Amano [the assistant technical caller at Cup of China] to downgrade just about every single one of my jumps,” Wagner said during a U.S. Figure Skating media call on Tuesday, January 10. “I think everything happens for a reason and I took that event and went back to the drawing board and went about a new technique of training jumps so that I could increase my quick twitch motion so that they’re not really squeaky and in the grey area and they’re much more obviously clean.”

Not only has Ashley been working on her technique, but she has also identified another key factor that has kept her from success.

“My long program this season is very challenging, it’s tough for my endurance,” Wagner confessed. “I couldn’t really figure out why I was having a harder time with this long program than other programs in years past. When I sat down and looked at all of it, this program does not stop. It might be slower music, but it builds and it builds and it builds. I’m expending energy all the way through the end.”

Following this realization, Ashley and her coach went back to the drawing board and began to incorporate endurance training. Wagner admitted that aside from her triple-triple, the main reason that she does not complete the rotations in her jumping passes is because of fatigue, which she hopes to overcome with their revised training strategy.

Ashley was “furious” at herself for not making the Grand Prix Final, but the absence of the Final gave her additional time to train and make adjustments for the U.S. Championships. She now feels physically and mentally ready to contend for another national title and her spot on the World Team.

“I’m honestly competing against myself because I’m usually my own worst enemy at Nationals, so if I think about everybody else that’s not really going to help me,” Wagner explained. “I’m going in to get that fourth title. I would love to round out my career with at least five titles, that’s my goal right now, so I’m on a mission to achieve that.”

It is clear that Ashley is going into the U.S. Championships focused on reclaiming her national title, but she has also been transparent that her ultimate goal is the 2018 Olympic Games. She has already had what is considered to be a long career for a female figure skater and many expect to her see retire following the Olympics, but Wagner is not ready to put a date on her finish line just yet.

“My mentality going into this Olympic season is that I will not retire with this Olympic season — that is in no way, shape, or form my intention,” Ashley said with confidence. “I think that puts so much pressure on an athlete to make it the dream season of all seasons. Raf has added this end of a career boost and I feel like if I’m still building and still improving and I have something left to give, than by all means I’m going to keep on skating because that’s how crazy I am about this sport.” She continued, “At the same time I’m not the kind of athlete to…I don’t ever want to be around long enough to watch my career dwindle out, so I think for me I will know when the time comes, but I am not intending on retiring after the Olympics.”

With the 2018 Olympic Games just around the corner, it is time for the ladies to begin taking steps to ensure that they receive one of the coveted spots on the U.S. Olympic Team and the U.S. Championships is a big part of that process. Wagner has never finished lower than sixth place in the event and she is not willing to settle for a mediocre career or an average performance.

“I’ve been around so long that I’ve seen athletes come and I’ve seen them go and I’ve been able to cling on to my spot,” Ashley said. “It’s just because I am so hungry to be something in this sport and to be remembered for achieving something great, whether that is my world silver medal or whether it’s an Olympic medal down the road we’ll see, but for me I think that I’m so passionate about what I do—I really, really want to win and that’s what I’m here to do.”