Following the U.S. Championships, Chen was hoping to continue her upward momentum at  the Four Continents Championships. Sadly, she struggled and ﬁnished in twelfth place. She attributes both nerves and boot problems to her less than stellar performance.

“Going into Four Continents I deﬁnitely had the goal of getting on the podium,” Chen said on a U.S. Figure Skating media call. “I knew that if I did skate well, it was deﬁnitely possible for me. I guess thinking about things like that was just something that I’m not quite used to thinking about yet. It was kind of a little stressful for me and with the addition of all of the boot problems and things, my mind was just very frazzled during the whole week there.” 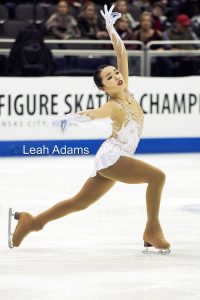 Chen went on to explain that the sole of her boot was collapsing during Four Continents, which was causing quite a bit of ankle pain. Boot issues have plagued Chen throughout her career, but she is certain that she is putting that behind her. She is now becoming proactive with her skates and has a backup pair and she is in the process of having a third pair of skates in the wings in the hopes of quenching these boot problems.

Once Chen had her new skates, the pain subsided and she resumed her training. She spent some time in Michigan with Marina Zueva re-working the footwork in her free skate, but then she hit another speed bump. About two weeks ago, while she was training in California, a skater collided into Chen. This other skater kneed Karen in the right thigh causing some deep bruising. With the help of physical therapy and acupuncture, this accident only derailed Chen for a few days. She is now healthy and ready for her World Championships debut.

“At Nationals, the biggest reason for my success was that not only was I just really focused on myself, I somehow didn’t really have any expectations,” Chen explained. “I knew that for me to get on the podium was a possibility since I did get the bronze in 2015, but I didn’t really think about it. I just went into Nationals attacking everything and having no expectations. I’m going to go into Worlds with that same sort of mindset and hopefully things will go the way that I want them to.”

Chen is coming into the World Championships as not only the new U.S. Champion, but also with the responsibility of maintaining three spots for the U.S. ladies at the 2018 Olympic Games. In order for the U.S. ladies to keep the three spots, the two best results from the World Championships out of Chen, Bell and Wagner must total no more than a thirteenth place ﬁnish. When asked if she felt the pressure of securing the three spots, she responded: “It is deﬁnitely in the back of my mind, knowing that it is very important that we all skate very well and we bring back three spots for the Olympics,” Chen said. “At the same time I don’t want to obsess over that. I just really want to be focused on what I want to get done at Worlds. It worked for me at Nationals, so I’m hoping to have the same mindset going in. It is my ﬁrst Worlds and I want to, in a way enjoy myself, but at the same time be very focused on doing my job and putting out two good skates.”

As Chen prepares to take on her ﬁrst World Championships, she sought advice from 1992 Olympic champion, Kristi Yamaguchi. Chen and Yamaguchi got together at a coffee shop only a few days ago. “She told me to skate dumb,” Chen recalled. “Your body knows what to do and when you’re out there you want to just let your body do what it knows best and things will happen the way that you want them to.”

Armed with solid advice, new boots and full heath, Chen is ready and determined going into the World Championships. Her critics are concerned that she has only been in a handful of international competitions as a senior and does not have the best track record in those events. Nonetheless Chen came through at the U.S. Championships and could very well be the dark horse at the World Championship.