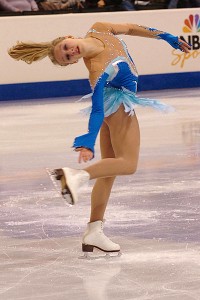 “I was very surprised when I looked at the scoreboard that I achieved a personal best in the first competition of the season,” said Kim. She won four of five international competitions last season, finishing second to Asada by 2.20 points at the 2008 Grand Prix Final.

In Paris, Kim opened her free skate with a flawless triple lutz-triple toe combination that three of nine judges awarded the highest grade of execution. She omitted her next element, a planned triple flip, but landed a double axel-double toe-double loop and performed a Level 4 combination spin and a Level 3 spiral sequence. Kim only got stronger from there with five more jumps, two more spins and a step sequence.

“This is the Olympic season and the first competition after I became world champion. I was worrying about that, but I finished my program without any problem,” she said.

Asada landed a triple axel in combination with a double toe to open her free skate. But with her next triple axel downgraded for under rotation, the 2008 World Champion had no chance of catching Kim, although she surpassed her teammate. Nakano received an edge call on her triple lutz and the downgrade of the Salchow in her triple Salchow-double toe combination.

The free dance closed out the competition on Saturday. By a margin of more than 16-points, Canadians Tessa Virtue and Scott Moir (197.71), the reigning World bronze medalists, won the competition over silver medalists Nathalie Pechalat and Fabian Bourzat of France. Great Britain’s Sinead Kerr and John Kerr were third with 177.11.