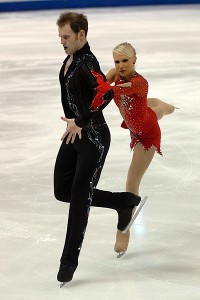 When Caitlin Yankowskas and John Coughlin take the ice at the Ice Challenge, coach Dalilah Sappenfield will remind them of the new motto in the Colorado Springs, Colo., World Arena: Focus only on what you can control.

“Dalilah and Larry [Ibarra] have spent a lot of time reminding us that our sport has become more about competing against yourself than against the other teams,” said Coughlin, who is entering his third season with Yankowskas. “Each competition is a challenge to find more points hidden in a stronger landing or showing conviction in your movement. Everything else we leave up to God.”

“I think our biggest goal this year is to show we can be reliable,” Coughlin said. “I think when we skate clean, we will be very competitive not only nationally, but internationally. If we get to nationals having followed our plan for the season, I am confident we will be pleased with the result.”

Yankowskas and Coughlin are determined to  find themselves on the podium at the 2010 U.S. Championships in Spokane, Wash., which will help decide the U.S. Olympic team, so they have designed two new programs that they will debut in Austria.

“Music is so important, especially in an Olympic year,” Coughlin said. “We tried so hard to find something obscure, that no one had heard before. It wasn’t until Caitlin and I confessed to each other that we were listening to Pearl Harbor in our cars and day dreaming programs, that we found something we both believed in so strongly.”

To compliment their free skate to selections from the Pearl Harbor soundtrack by Hans Zimmer, the pair will skate to “Piano Sonata No. 16” by Mozart for the short program.

“Our short program was music that Dalilah had been given by a friend,” he said. “She brought it on the ice and we immediately liked the connection between the two characters that we could picture. It is the perfect music for the direction we want our team to go.”

The programs are choreographed by Marina Zoueva and Damon Allen.

“We don’t want our programs this year to be element after element,” he said. “Dalilah has stressed that our elements should be accents in our choreography. We are learning everyday that there is a difference between a movement and a moment in choreography. I think all of our teams are training smarter and making each element or run through have value towards our end goal.”

Yankowskas and Coughlin will also skate at the Independence Event Center Grand Opening in Independence, Mo., before making their season debut on the Grand Prix series. They will compete at Skate Canada, Nov. 19-22, in Kitchener, Ontario.