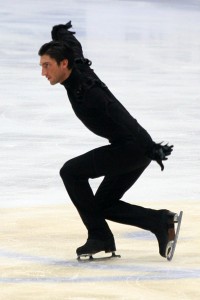 Can you talk a little bit about the start of your Olympic season at Cup of China? I feel that the start of my season could not have gone any better than it did. I wasn’t perfect, there were some technical errors, but it gave me a list of things to then come home and work on to get better. I don’t want to be perfect today or even at Skate America. I want to have things that I can improve on. With that said, skating so well really motivated me. I have never been the one to start the season on fire. Definitely, Cup of China was the best start that I’ve had to so far and I’m really happy that I can have those performances as a starting point to grow from. I’m happy but I still see a lot of room for improvement.

Is the flip one of those places that you see room for improvement? Or do you think it was more of a fluke? Having an edge call on a flip is something that has never happened to me before but if it gets called once, it becomes an area of concern. I know that more skaters are getting edge calls now than before. If someone would have told me that I would get an edge call, I wouldn’t have ever thought it would be on the flip. I’ve had my flip used so many times in tutorials on how to correctly do the jump. And personally, I think it’s actually one of my best jumps so to have it called was surprising, but I have worked on it.

Have you completely changed the jump? We didn’t change it completely. When I came home from China, my coach [Frank Carroll] and I scrutinized the flip very closely. We think what happened was that my inside edge takeoff was not prominent enough. I was taking off on the inside. However, while I tried to build my momentum for the takeoff of the jump, I would switch to the outside edge beforehand. The change to the inside edge was not clear enough to the judges, so I’ve really tried to correct that lead up to the takeoff so there is no gray area. I can’t give the judges a gray area.

What else have you been working on since Beijing? I worked on cleaning up the turns in my step sequences. I worked on two of my spins as well to improve those, make them faster. I think probably one of the biggest things I tried to change parts of the choreography in my long program. I’ve sped up some parts and slowed others down so it’s not an even tempo. I wanted to show a difference. I think the changes add drama, add excitement. I’m really happy with the variations in the program now.

It sounds like you really did have a list of things to improve on after China. [Laughs] I think those changes were enough for now but I’m sure I’ll find some other things to work on after Skate America. I’m really proud of my programs and the direction they’ve taken.

And any changes to the costumes? No, I have not made any changes to either of the costumes for Skate America. But Skate America will be the last time that I wear those two particular costumes. [Vera Wang] has some new ideas that she is working on for the next few competitions. After Lake Placid, I am going to New York to skate on the TODAY Show on Monday morning then I’m going straight to Vera. I’ll be working with her on Tuesday also.

I really can’t say enough great things about her. She has such great enthusiasm for design and skating. She got on the ice with me and watched me perform. Vera even did some of the movements herself to feel what it feels like skating my programs. She was a skater so she is very in tune to what skaters need.

Her idea was to make my costumes not look like skating costumes but to look more like modern art, which I think the costumes really are. I think her work is art. She’s truly an artist. I’m very lucky to work with someone like her because he work is so amazing. She’s really great. I am really looking forward to working with her again next week.

Did you ask for black? I let Vera take the costumes in whatever direction she wanted. She also likes the color black, which is one of the colors I’m really comfortable in, but she did some things that made them more than black costumes. I’m really pleased with the outcome.

• For the second part of the interview, click here.