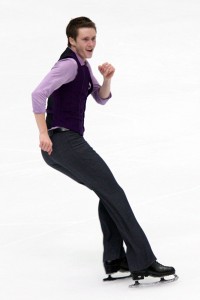 Jeremy Abbott outdid himself at the 2008 Grand Prix Final in Goyang City, Korea. After setting the highest score ever recorded by an American skater at an International Skating Union event en route to winning last season’s Cup of China, he did it again at the Final, improving his overall personal best from 233.44 points to 237.72 to take the gold.

He became the first American man to win the competition.

For Abbott to defend his title at the 2009 Grand Prix Final in Tokyo, he needs to skate a commanding performance at Skate Canada, Nov. 19-22, in Kitchener, Ontario, Canada. Abbott, who currently holds seven points from his fifth place at the NHK Trophy in Nagano, Japan, would advance with a gold medal, and could advice with a silver or bronze.

Only the top six skaters in each discipline advance to the Final based on cumulative points from the two regular season events. Japan’s Nobunari Oda has already secured one of the spots with 30 points, 15 points for his wins a Trophee Eric Bompard and Cup of China, while Evan Lysacek (28) and Brian Joubert (24) are also guaranteed a spot.

Chan, the two-time Canadian Champion, withdrew from the Rostelecom Cup earlier this season because of a leg injury so he cannot advance to the Grand Prix Final. However, a medal could advance all but Preaubert, who was seventh at Trophee Eric Bompard, to the Final.

Former U.S. bronze medalist Stephen Carriere is also competing following a bronze medal placement at Finlandia Trophy and sixth place showing at Cup of China. The 2007 World Junior Champion has two previous medals from the Grand Prix, claiming the bronze at 2007 NHK Trophy and silver at 2008 Cup of China.