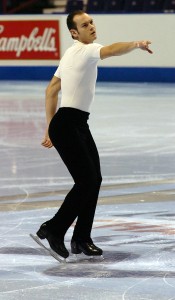 Former U.S. Junior Men’s Champion Nicholas LaRoche is paying it forward. Through Jan. 17, LaRoche’s US Athletic Foundation is auctioning two dozen items, including one-of-a-skating skating memorabilia, to help fund the training of skaters who face financial hardships just as he did during his career.

“We are holding a auction with all donated items to raise money to help ease the financial burden on the athletes currently working with the US Athletic Foundation,” LaRoche said. Items,  some of which started with a $5 asking price, are available for viewing on the US Athletic Foundation Web site at www.usathleticfoundation.org/auction.html and the Foundation’s eBay page at http://shop.ebay.com/usathleticfoundation.

Among the beneficiaries of the fund is 2009 U.S. Champion Alissa Czisny, one of the front runners for the 2010 U.S. Olympic team. Other figure skaters supported by the Foundation are Mary Grace Baldo, Rachel Cleavelin, Grisha Fournier, Zarmine Kouyoumdjian, Dennis Phan and Cameron Rawlings.

“With all the help and support I had during my skating career from many skating friends, family and fans I realize how difficult it is to not only strive to be one of the nation’s top athletes but to put aside the difficulty of making ends meet financially on top of training,” said LaRoche, who last competed in the short program at the 2009 U.S. Championships but withdrew from the free skate. “After my retirement of competitive figure skating and a family tragedy I teamed up with my sister Tricia to help the struggling athletes who grace our country with talent. The US Athletic Foundation supports not only some of the Figure Skaters Online athletes but all ages and levels as well.”

Non-skating items include four (4) VIP tickets to the Ellen Degeneres Show, a pearl necklace, perfume and a $350 gift certificate to Salon Del Mar.
__________