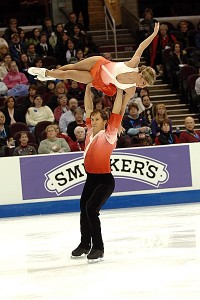 Former U.S. Champions Brooke Castile and  Benjamin Okolski, who twice competed at the World Championship, have announced their retirement from competitive skating. Both athletes plan to pursue careers in coaching while she also plans to choreograph.

“Although we are retiring from competitive skating, I don’t intend to leave the sport,” said Castile, who has designed the pairs costumes for much of their career. “I feel like this is a transition rather than a retirement.”

Castile and Okolski paired up in 2002.

“At the 2001 Midwestern Sectionals I had a terrible competition and was feeling low about skating,” she said. “Ben had approached me about skating with him.  Ben and I were friends for years before this and I was finally ready for a change.”

After competing at club events in summer 2002, Castile and Okolski made their international debut at the 2002 Junior Grand Prix event in Scottsdale, Ariz., where they finished sixth. The duo went on to have a successful career, finishing 12th and 11th at the 2007 and 2008 Worlds, and claiming the bronze medal at the 2008 Four Continents Championships.

In addition to their U.S. title in 2007, their career highlights included earning a bronze medal at the 2008 U.S. Championships. They won the pewter medal in their last competition, the 2010 U.S. Championships, and also finished fifth at the 2009 nationals.

“I’m looking forward to going back to school as well as continuing coaching,” said Oklolski, who will now attend Washtenaw Community College, where he is considering a major in accounting. “I hope to pass on what we’ve learned throughout our competitive career.”

What to look for in Evan Lysacek’s paso, foxtrot