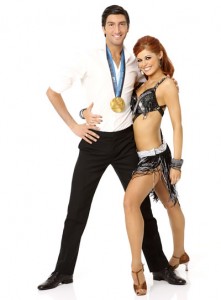 Ballroom dancer Katrina Burch sat down with Figure Skaters Online to explain the basics of the paso doble and foxtrot, which is the dance that Olympic Champion Evan Lysacek and partner Anna Trebunskaya will be performing on tonight’s episode of Dancing with the Stars. Team Evanna is contesting with three other couples.

The name translates to Double Step and is the music that usually accompanies it, is a march type song. The reason I say usually is that in DWTS, they rarely use traditional Pasodoble (the real word) music. This dance however has a specific character: A bullfight. Look for lots of strong Flamenco sounds and steps, Spanish arms, tight lines, staccato movements, and aggression.

Evan kind of has an advantage in this dance, as he’s already performed to one of the most popular Paso Doble songs used: Espana Cani. He used his “Espana Cani” program at several major events including the 2006 Olympic Winter Games. Just a note, it one of my favorite programs from Evan:

A paso to “Espana Cani”:

Like Quickstep, the foxtrot came into being power as a dance in the roaring 1920s. One of the rumored fathers of the dance is legendary vaudeville actor, Harry Fox but as there isn’t a whole lot of proof, it’s just that a rumor. Originally danced to ragtime music (think Scott Joplin’s “The Entertainer”) it’s now done to swing/Big band in most social ballroom dance places, though it can be danced other songs. The holds for foxtrot were brought about by legendary dance master Arthur Murray. In Dancesport, there are two types of Foxtrot, International (which at times is called “Slow Foxtrot” and American. In the American, version, the hold is and can be broken more. Look for feather steps, reverse turns, and subtle rise and fall (not a lot like in Waltz). The basic, basic step for Foxtrot is “slow, quick-quick, slow” Which, incidentally is the same step sequence for the rumba!

Roberts and Trebunskaya from Season 1:

What to look for in Evan Lysacek’s Argentine Tango