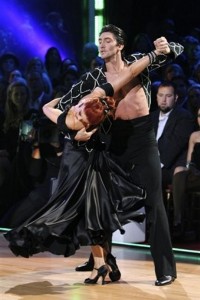 Evan Lysacek and his professional dance partner Anna Trebunskaya have made it to the finals of the 10th season of ABC’s reality television show Dancing with the Stars. The team, dubbed Team Evanna, will compete at the finale on May 24 against ESPN reporter Erin Andrews and Maksim Chmerkovskiy and Pussycat Dolls performer Nicole Scherzinger and Derek Hough.

“I am so thankful to everyone who helped me and Anna reach the Dancing with the Stars finale. The fans are the most important judges in this competition,” Lysacek said. “No matter what we scored, I know that we could not have advanced this far without all of the people at home calling in, texting and going online to cast their votes. Anna and I appreciate their support so much. We would not be where we are today without the fans so I can’t thank everyone at home enough.”

On May 18, Cincinnati Bengals wide receiver Chad Ochocinco and Cheryl Burke were eliminated from the competition after scoring 52 points for their two dances Monday, four points less than Andrews and Chmerkovskiy, who joined them in the bottom two. Lysacek and Trebunskaya tied Scherzinger and Hough, scoring 29 for one dance and a perfect 30 for the other.

“I am so proud of what Anna and I were able to do out there this week,” said Lysacek, the 2010 Olympic Champion. “Anna is a great partner. Every week, she pushes me to become a better dancer, and uses everything she has to make sure I can be successful out there. She gives me so much. I’m so happy we’re in the finals because that’s where Anna really deserves to be. She’s phenomenal and I’m honored to dance with her.”