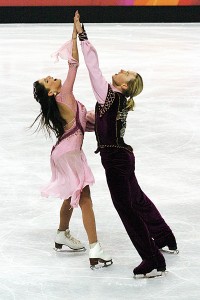 Melissa Gregory has made a career of podium performances. As an ice dancer with husband Denis Petukhov, Gregory won six medals at the U.S. Championships (2002-2007) and medaled at four international competitions: Skate America, Skate Canada, NHK Trophy and Nebelhorn Trophy.

Last month at the U.S. Olympic Assembly in Colorado Springs, Colo., she stood on a podium again, this time to accept the prestigious Rings of Gold award from the U.S. Olympic Committee for her work as the creator and director of Fever on Ice at Trinity College. The Rings of Gold, inaugurated in 1996, recognizes both an individual and a program dedicated to helping children develop their Olympic or Paralympic dreams and reach their highest athletic and personal potential. USA Swimming’s Make a Splash program was also honored.

“It is an honor to recognize Melissa and Make a Splash for their commitment to the lives of children,” USOC Chief Executive Officer Scott Blackmun said. “Through programming and personal passion, each is making a difference and not only supporting the athletic talent of young people but also teaching skills those children will carry with them for a lifetime.”

Gregory, who serves as director with Petukhov, is the first figure skater to be recognized with the Rings of Gold award. She was considered for the USOC award after receiving three nominations from those involved with the program, which started in March 2009.

“It feels amazing. It’s really exciting and also humbling to not only be the first figure skater to receive this award but to just earn that recognition for the Fever on Ice program,” Gregory said during an interview at the Colorado Springs’ Antlers Hilton prior to receiving her award. “The U.S. Olympic Committee is a very prestigious organization. I’m so happy to be recognized by them. I hope this award can help us make larger connections in the future and help Denis and I continue to grow this program.”

Held from September to March, Fever on Ice is a program that fuses arts, education and ice sports for sixth, seventh and eighth grade students Sport and Medical Sciences Academy in Hartford and Portland Middle School. While participants, most who come with no previous experience in skating, learn the basics of the sport on Saturdays and Sundays, they are also given homework assignments in math, science, writing and other subjects, an element that has helped the program earn a grant from the Connecticut State Department of Education.

“When youth are in the sixth, seventh and eighth grade, that is the most impressionable time in their life,” Gregory said. “We will try to extend it in the next year into elementary school but it seems kind of crucial to get with youth before high  school. I think that’s when they become really impressionable and at a cross roads in their life when they’re deciding which avenue to take. When they’re making those decisions, they need strong role models to look to, and I think the program gives them something really positive that they will hopefully carry with them as they get older.”

Gregory pointed out that the program helps keeps the participants off the streets. Petukhov added, “It makes a big difference at that age when they’re doing a physical activity on the weekends and they are also working on their education. They’re working towards something that makes them feel good about themselves.”

Participants are offered the program through Sport and Medical Sciences Academy in Hartford and Portland Middle School, which are an inner-city school and an urban school. “We picked one of each because we want to help with cultural diversity and reduce racial segregation,” Gregory said.

The final element of the program is an ice gala that not only included all of the participants as well as figure skating Olympians but also included Cirque du Soleil performers and dancers from MTV’s America’s Best Dance Crew.

“Most of the kids come into the program without even knowing that indoor skating existed,” Gregory said. “The sport is completely exotic and foreign to them. To see their transformation from their first day to the show, it’s like night and day. It’s a complete 180 degree turnaround. For me, that is what is really rewarding, seeing that difference in kids who never would have had the chance to grow in that way without this program. It’s really special for me to be a part of that.”

Students have the opportunity to learn all ice sports while participating in Fever on Ice.

“We obviously start with more of the fundamentals of skating because everybody needs that,” Gregory said. “But we breakout into ice theater and we teach them jumps and spins when they’re ready for that. We go into racing to see if anyone is interested in speed skating. We also offer them some hockey. It’s not limited because the ice has so many things to offer them.”

Participants can also learn off-ice skills that can help them in their gala performance.

“We just want to give them an opportunity to challenge themselves with things that they enjoy,” Petukhov said. “Maybe ice dance is not for them but that’s why we have Cirque du Soleil performers come work with the students. We have dancers and Olympic gymnasts. We want to show them many things not just skating although the skating is a big part of it because that is the area where Melissa and I can give back.”

In the first year, students were also given an up close look at the Olympic Winter Games, participating in the USOC’s 100 days to Vancouver celebration in New York’s Rockefeller Center and talking about the Vancouver Games with Gregory and Petukhov, who finished 14th at the Games in Torino, Italy.

“Half the kids had never seen an Olympic Games before this year and a lot of them watched the Vancouver Games because of this program,” Gregory said. “They would come into the rink and say ‘Did you see this?’ or ‘That was awesome.’ It was completely new experience for them. ”

“They were all very curious when they found out that we had competed in the Olympics before,” she said. “They wanted to hear everything about our experience. They were thirsty for knowledge, which is something that I found extremely encouraging. Maybe this experience will be to one of those skaters what Brian Boitano is to me.”

The second Fever on Ice show will be held in March 2011. “The show was more than we could have hoped for last year but we hope it continues to grow. Last year we had Caryn Kadavy and Jozef Sabovcik attend Fever on Ice and we hope that more of our friends will become involved,” she said.

“It is hard to put into words what this program has done for me,” Gregory said. “Denis and I had our own careers and we’re very fortunate to fulfill our goals of competing at the Olympics but how this program makes me feel is completely different. With this program, we are getting to give back to kids who are impressionable and who would have never had the opportunity to do these things. To see how it is essentially changing their lives, to see how they are becoming better students and they’re making better decisions is just so rewarding for me. It’s a feeling that is completely different from what my skating career gave me.”