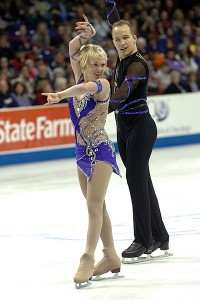 The 2010-11 Grand Prix season gets underway this week at the NHK Trophy in Nagoya, Japan, and Caydee Denney and Jeremy Barrett are ready to hit the ice with a new perspective.

In late August, Denney and Barrett announced that they would be ending their two-year relationship with coaches Jim Peterson, Lyndon Johnston and Alison Smith to instead train with John Zimmerman and Silvia Fontana in Coral Springs, Fla.

“The goal for Caydee and I this year is to really step up our component mark and make an even bigger splash on the pair scene,” said Barrett said. “We started to do this by having both of our programs for the year done by David Wilson. We had a great time working with him and feel our new programs will be special. We knew that John was in Florida with his wife Silvia and felt like they had a lot to offer as coaches.”

However, close proximity was not the only determining factor. “John is someone that I always looked up to,” Barrett said. “I feel that he and Kyoko were the last great U.S. pair champs, and if Caydee and I want to be the next great U.S. champs, why not learn from them?”

With new coaches and fresh programs, “Love Theme” from the Cousins soundtrack by Angelo Badalamenti for their short program and “Rhapsody In Blue” by George Gershwin for the free, Denney and Barrett hope to build on their successes from last year.

Barrett admits that achieving the successes of last season was not as easy as he thought it might be, especially the road to Vancouver and a spot on the Olympic team.

“I heard everyone say that Olympic year is always the hardest, but until you go through one you don’t fully understand,” he said. “We were very happy about winning nationals, but after we skated I became pretty sick. I was coughing so hard that I coughed a rib out of place, so during the two weeks we had to train for the Olympics, I was only able to skate about four full days. We were not able to do a full run-through of the programs until a couple days before we competed in Vancouver. It was definitely a learning experience.”

Like most Olympians, Barrett commemorated his time in Vancouver with a permanent reminder: a tattoo of the Olympic rings. “I always said since I was a kid that if I made the team I would get the tattoo,” he said. The coolest part for him is having people recognize him and thank him for representing Team USA.

Denney went a slightly different route, celebrating their accomplishments by investing in a new car.

With the NHK Trophy short program Friday, Denney and Barrett are preparing the best way they know how and setting the bar higher than the year before. The skating duo hopes to better their fourth-place finish at the competition from a year ago, which is just the beginning of what they hope will be a solid season.

“We are very excited to show everyone our new programs,” Barrett said. “Our main goal this year is to qualify for the Grand Prix Final. We would be very pleased if we made it.”