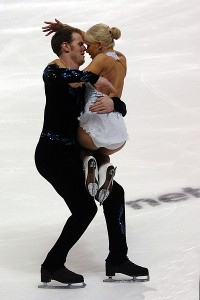 Caitlin Yankowskas and John Coughlin finished third in the free skate at the NHK Trophy in Nagoya, Japan, enough to pull them up to fourth in the overall standings with 154.88 points. The Americans were bested by China’s Qing Pang and Jian Tong (189.37), Russia’s Vera Bazarova and Yuri Larionov (173.83) and Japan’s to Narumi Takahashi and Mervin Tran (155.66).

But the program, which is a tribute to Coughlin’s mother Stacy, who passed away earlier this year, was not without mistakes. They had two elements that only garnered a Level 1 and Yankowskas also fell on a triple toe in their planned side-by-side jump combinations.

Even with the one point deduction, they finished the segment with 100.69 points.

Denney and Barrett had a disappointing performance to “Rhapsody in Blue,” placing only seventh in the free skate. While the team performed a throw triple Lutz and a throw triple loop, their other pair elements were not as strong. Five elements, including the death spiral, received only a Level 1.

Two-time World Champions Pang and Tong, the Olympic silver medalists, gave an emotional performance to “Liebestraum” by Franz Liszt, earning 122.27 points. “We made two major errors on the jumps today, but it was our first competition and we’ll skate better in our second and third event,” Tong said.

They completed triple twist and two triple throws but Pang doubled the planned side-by-side triple toes and stumbled on the landing, bringing their total element score to 57.58. Their program components scored 64.69.

Bazarova and Larionov made no errors in their performance to “The Man in the Iron Mask” soundtrack, a program highlighted by difficult lifts. “We are happy for today with what we did and we did our job that we came here to do. We made some minor mistakes and we’ll work on that,” she said.

Takahashi and Tran, who qualified for the Junior Grand Prix Final earlier this season with impressive performances on that circuit, proved they can compete with the seniors too. While they were fourth in the free skate because of Takahashi’s falls on the opening side-by-side triple Salchow and later on the double Axel, they received 98.43 points, just enough captured their first medal at the senior Grand Prix.

“First competition of the year, and we are very pleased with how we skated the short dance and the free dance,” White said. “We’re a little tired now, because we’ve put it all out there.”

Davis and White put out a charismatic Tango highlighted by difficult lifts and smooth footwork. The World and Olympic silver medalists picked up 98.24 points for the free dance.

“Looking at our levels and scores, there is a lot we need to work on,” Davis said.

Shibutani and Shibutani had to came from behind Saturday after he had fallen Friday’s short dance. In the free, the siblings danced flawlessly to “Smile” and “Let’s Face the Music and Dance,” executing their demanding lifts and footwork effortlessly. The 2009 World Junior silver medalists earned 83.25 points and moved up two spots at 136.93 points.

“We’re really proud of how we skated this entire week,” he said. “Medalling is just the beginning of our senior career, but I think it’s a really good start.” 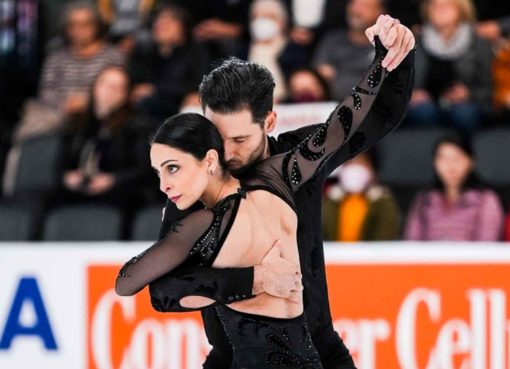