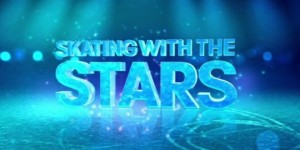 Ballroom dancer and figure skating enthusiast Katrina Burch has covered Dancing with the Stars for Figure Skaters Online and returns to cover the first season of Skating with the Stars. Here are her thoughts on the debut episode.

OK, kind of like the tall, dark and handsome British man.

First off is a performance by the pros. Very poppy/club dance song. Very much like an opening number to Stars on Ice. That “tube/slide” thing is crazy! Next they bring out the couples. First out is Brandon Mychal Smith, then Sean Young, then Jonny Mosely, then Rebecca Budig, then Vince Neil and finally Bethany Frankel.

Then they introduce the judges. They are Johnny Weir who’s going to look for connection. Then Lurianne Gibson who apparently is a choreographer. She’s going to looking at the choreography. And finally the voice of  figure skating, Dick Button. OK… Laurianne’s hair? Not good. Judges will give two marks, artistic and technical. Tanith Belbin will be explaining the rules.

First up the rules – Required Elements:
– First up one foot assisted glide
– A pair spin

First up is Brandon Mychal Smith paired with Keauna McLaughlin. Their package shows their first meeting and first time on the ice. He says he’s an avid roller skater which will help him immensely. Reminds me very much Kyle Massey on DWTS. Ok, He seems to have an unfair advantage because he has roller skating background. Some very nice choreography. They were in sync through most of the routine. Their first lift was a very nice kneel lift. Their required spin was on one fit, centered, but just slightly off at the end. Brandon did a very nice split spin with Keauna. They had a good spiral (or assisted glide) but Brandon needed to stretch through his free leg a little more. Overall it was very nice routine and good for the first out, which is never easy.

Johnny: The focus was great. Balance checks, don’t let your feet leave the ice unless they need to.
Dick: Very impressive start. Got a spiffy personality. Looked comfortable most of the time. Needs to work on flow and movement. Work on the spiral. Gave him lots of stuff to work. Clunky but good going.
Laurianne: Magical. Can’t believe he’s only been skating for five weeks (but he has rollerskating experience!)
Tanith’s opinion: Balanced and centered and spotting Keauna. Tanith liked the spiral.

Sean Young with Denis Petukhov started with Sean explaining she can skate. Says she wants to impress her sons. In their performance, there is a connection there that I like. Their  first lift was a nice seat lift. Loved her stretch in her spiral but very shaky. The semi-shoot the duck was very shaky. I’m guessing that’s  the move where Denis caught his blade on. They had a spin lift that was good! In that cartwheel “lift” it was amazing beautifully stretched! I really liked the ending as well.

With Jonny Mosely, who is skating with Brooke Castile, they show their meeting and Jonny, the Olympic athlete, getting frustrated.And we have our first fall on camera. Brooke thinks he’s sexy (I agree!). Jonny says he’s afraid of spinning and falling. Their performance had good synchronicity. Their first spin was a very nice  death drop spin. They had a very nice press hop lift! They have a amazing pair spin, just needs to work on his posture. They also had a good spiral but Jonny needs to stretch just a bit more. Love that they’re doing all these shoot the ducks! Jonny even included a jump (two footed) jump. Absolutely love the ending on this one

Johnny: “Terrorized the ice” So dynamic and aggressive.
Lauriann: “Take my breath away!” Dynamic, amazing. Needs rhythm. “More funk in his trunk”
Dick: Wants to see transfer of ski technique with good knees. Work on posture for next week
Tanith: Shows the death drop. and shows the pair spin.

To mark the halfway point, a performance by Johnny Weir to Poker Face.

Rebecca Budig, who is with partner Fred Palascek, apparently can skate. She’s my second pick to win. In their program, they had a great laid out shoot the duck though not quite as low. She has such amazing stretch in that spiral lift. She’s also pointing her toes… This is going to be hard to beat! She had a very nice catch foot spin (and I’m surprised Dick didn’t comment on it since he hates them!). She had one tiny mis-step (looks like she caught her toe pick just  slightly) but she recovered very nicely. Their ending lift was a nice double up (up down up again). One of the things she needs to work on (among the things the judges mentioned) is her dance and musicality in places.

Vince Neil, who is with Jennifer Wester, comes into the competition having already won a figure skating competition when he was younger.  Jennifer expected him to be a complete headache but very happy that he’s not. Says his biggest problem is balance. Got a shot of him grabbing her boobies. In his performance, he’s a little slow to start the program. He’s a little tentative. Nice shoot the duck. He definitely has good rhythm in the dance. No synchronization with Jennifer in that side by side spin but ended together. Cool hydroplane by Jennifer. Not much skating content. Kind of
shaky though.

Johnny: Credit to her. Wanted the rock star performance. Be more confident and more emotion.
Dick: Has respect for him for taking the competition on. For next week, be fearless.
Laurianne: Liked it and thought the performance was good. Needs to spot in the turns. Has good Musicality.
Tanith: shows the split drop. Shows the side by side spin

Bethany Frankel, with Ethan Burgess, was next. Has a busy schedule and has been skating before. I was wondering if her ego would get in the way… Also has problems with spinning. In her performance, she starts out with a press lift. She has decent musicality and seems to pick up choreography. Nice thigh press lift. Good pair spin. Kept her wits about her. Nice spiral but a little slow. She’s really getting into the song. Good free cartwheel lift. Very dangerous and nicely done flying spin. She also needs to work on her lines.

Johnny: Body looks sick. Needs to give it her all. “Skating has to come first”
Dick: Looks spectacular. Spins and pairs moves look good and trusting. Needs more flowing and less static. Not walking on eggshells.
Laurianne: Gives her props for coming back from having a baby. Tells her to relax the shoulders.
Tanith: Shows the nice lifts.

Overall impressions on the first night is that it feels slightly choppy in their flow but I think that also might be due to Dancing With the Stars running over. I also feel that the script they’ve giving both the host and Tanith is… awkward to say the least. Tanith knows how to critique and they should just let her without a script.