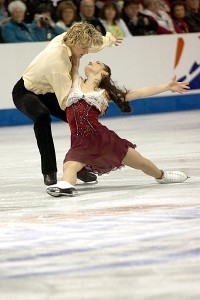 Compton (Colorado Springs, Colo.) won two World Cup titles and a national championship. The former world championship silver medalist started off the month with her seventh consecutive national title at the USA Cycling Cyclo-cross National Championships in Bend, Ore., on December 12. The American champion immediately headed to Europe where she won her third UCI Cyclo-cross World Cup of the season on December 19 in Kalmthout, Belgium, and recorded her fourth World Cup win of 2010 in Heusden-Zolder, Belgium on December 26.

Additionally, at the 2010 AT&T Short Course World Championships in Columbus, Ohio, December 2-4, Lochte placed third in the 200-yard back. He will be competing this weekend in the Austin Grand Prix, January 14-16 at the Joe Jamail Texas Swimming Center on the University of Texas at Austin campus.

With the win, Davis and White have now medaled at 10 consecutive Grand Prix events dating back to 2007. They are now preparing for the 2011 AT&T U.S. Figure Skating Championships January 22-30 at the Greensboro Coliseum Complex in Greensboro, N.C.

Each National Governing Body may nominate up to but no more than one female, one male and one team per discipline. The winners are then voted on from that pool of nominees.

Finishing in second place in this month’s female category was figure skater Alissa Czisny (Bowling Green, Ohio), who won the gold medal at the ISU Grand Prix of Figure Skating Series Final in Beijing, becoming the first U.S. lady since Sasha Cohen (2002) to stand atop the podium at the Grand Prix Final. Her free skate featured a triple Lutz-double toe combination and a triple flip-double toe combination. She followed those with four more triples, while her trademark spins helped her earn 116.99 points for her free skate. She finished with 180.75 total points.

In third was freestyle skier Hannah Kearney (Norwich, Vt.) who, after the first three World Cups all in December, held the coveted title of women’s overall leader having posted no worse than second in the three competitions. She started off strong, earning a win in Ruka, Finland. Next stop on the tour was Meribel, France, where she ended up second before earning her second World Cup win of the season in Beida Lake, China. Kearney won the yellow bib in Ruka and hasn’t let it go as she heads to the Nature Valley Freestyle Cup in Lake Placid, N.Y., January 21-23.

Finishing a close second for the men was skier Ted Ligety (Park City, Utah) who started the World Cup season strong, particularly in giant slalom. After the opening race in Soelden, Austria, was canceled, Ligety hit the ground running, winning three consecutive World Cup GS races in the month of December. His winning streak started on home snow at the Audi FIS Birds of Prey World Cup in Beaver Creek, Colo., marking the first U.S. GS win since 2005. He kept the momentum by winning the following weekend in Val d’Isere, France, before picking up his third win just ahead of the holidays in Alta Badia, Italy. After Alta Badia, he moved into the World Cup overall lead and now presently sits in fifth, and in the GS, he is the current World Cup leader.

Two-time Olympic champion Shani Davis (Chicago, Ill.) finished third in the voting. He continued his winning momentum in December with outstanding performances at the ISU World Cup stop in Obihiro, Japan, and the U.S. National Allround Championships in Salt Lake City, Utah. Davis capped the fall ISU World Cup season with eight medals. On December 11, at the ISU World Cup in Obihiro, Davis won the 1000m A division, marking his 12th consecutive victory in the distance. He returned to skate the second 1000m on Dec. 13 in Obihiro and won silver in the men’s A division. Back in the U.S., Davis won the U.S. Long Track Allround Championship title on December 31 in Salt Lake City. The event marked Davis’ return to the allround distances (500m, 1500m, 5000m and 10000m) and his sixth U.S. allround title. Davis dominated the 1500m, skating a 1.42.95, the world’s fastest time recorded in the distance this season. He also won the 500m, the 5000m and took second in the 10000m – his first race at the distance in two years.

Coming in right behind Davis and White in the team category was the BMW Night Train four-man bobsled team. All the pieces of the puzzle came together for the crew in the December Lake Placid, N.Y. World Cup race. The sled looked sleek with its new design, the crew was powerful off the start, and Steven Holcomb (Park City, Utah) threaded together two perfect runs to win the race by 0.58 seconds. Holcomb and his team of Justin Olsen (San Antonio, Texas), Steve Langton (Melrose, Mass.) and Curt Tomasevicz (Shelby, Neb.) effortlessly glided to the finish in 1 minute, 48.01 seconds for the victory. In a sport measured by hundredths of a second, Holcomb said winning by 0.58 seconds is like winning a marathon by 1.5 hours.

Finishing in third place in the team category was the U.S. Long Track Speedskating World Cup Team. Wrapping up an outstanding fall World Cup season, the U.S. team won seven medals – four gold, three silver – in December. 2010 Olympian Heather Richardson (High Point, N.C.) skated to a silver medal in the ladies’ 1000m on December 4, the opening day of World Cup #4 in Changchun, China. On December 5, Olympian and 2009-10 500m World Cup Champion Tucker Fredricks (Janesville, Wis.) won gold in the 500m in Changchun. That same day, Richardson skated to a silver medal in Changchun in the ladies’ 1000m – her second in the distance over the weekend.