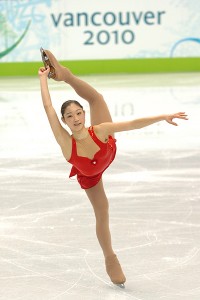 Skating to music from the soundtrack of The Witches of Eastwick by John Williams and “Un Sospiro” by Franz Liszt, Nagasu put on a show. Her triple Lutz-double toe combination came with ease and the triple flip and double Axel from an Ina Bauer were no problem.

“A lot of people still expected a lot of me, even though I hadn’t skated in a while,” Nagasu said. “All the best skaters can step up their game, and I’m learning how to do that.”

Nagasu’s spins, including a Level 4 layback to end the program, helped her to 63.35 points. Czisny trails with 62.50 while Flatt has 62.32 heading into Saturday’s free skate.

Skating to a piano concerto that highlighted her soft style, Czisny nailed her opening triple Lutz-double toe combination and her other two jumps, the triple flip and double Axel, were secure, although she received an edge call on the flip. With jumps out of the way, the 23-year-old only had her best moves left, and memorized the crowd with two Level 4 spins, with her trademark flexible positions and speed, and an elegant layback that brought the crowd to their feet.

“I was happy with the performance because I really went out there, stayed focused on what I’ve been working on,” said Czisny, the 2010 Grand Prix Final Champion. “I think this whole Grand Prix season gives me the confidence I can do my job when I have to do my job.”

Debuting a new short program to “East of Eden”, Flatt skated with a fire that most had never seen in the 18-year-old before. She nailed her opening triple flip-double toe, triple Lutz and double Axel before coming alive with an explosive straight line step sequence.

“I was a little disappointed I didn’t get the triple-triple in but it was a great start to the competition,” said Flatt, who finished sixth at last month’s Grand Prix Final while battling a foot injury.

Like Nagasu and Czisny, Flatt also brought the crowd to their feet.

The crowd also received Zawadzki, Gao and Lam well. Both Zawadski, a rookie, and Gao, who was fifth in her senior debut last year, performed a triple-triple, with Zawadski doing a toe-toe and Gao landing a flip-toe. Lam, making her first appearance in the senior ranks, did a triple Lutz-double loop.

The short program was rough from the start for Wagner, who is battling the flu like many other competitors. She intended to start with a triple flip-triple toe combination but turned out of the flip and left off the second jump. She regrouped in time to add double toe to her triple Lutz but it was not enough to help her contend with the trio of U.S. Champions.