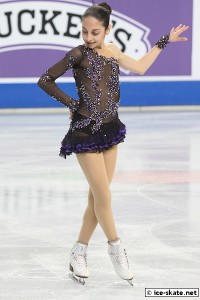 Ladies
Of the 33 competitors expected in the ladies event, 12 are making their debut on the JGP circuit including Cain (Coppell, Texas), a last minute replacement for Katarina Kulgeyko, and Japan’s Miyabi Oba, who finished eighth in her international debut at last season’s World Junior Championship. Experienced competitors include Russia’s Polina Agafonova, the bronze medalist at the 2010 World Juniors, China’s Zijun Li, the bronze medalist at the 2010 JGP Final, and Siraj (Brookline, Mass.), all who could take home the top prize.

Both Americans come into the event with impressive resumes, although Cain has mostly excelled in pairs. She is the 2010 U.S. Novice Pairs Champion and 2011 U.S. Junior Pairs Champion with Joshua Reagan, with whom she will make her Grand Prix debut with at Rostelecom Cup, Nov. 25-27, in Moscow, Russia. The team was fourth at the World Juniors earlier this year. Cain was sixth at the 2011 U.S. Championships in junior ladies and second as a novice in 2011 but has never competed internationally in singles.

Siraj comes into the event following an eighth place senior debut at the 2011 U.S. Championships. Last season, she won a silver medal in her career JGP debut in France and followed it with another silver in Great Britain. She was seventh at the JGP Final. In 2010, Siraj placed second in the junior ladies competition at nationals, following that with a silver medal in the novice category of the Gardena Spring Trophy.

With such an experienced field competing in Riga, it will be difficult for Cain and other newcomers to crack the podium, if Siraj and others perform to their ability. Podium predictions: 1) Polina Shelepen of Russia. 2) Miyabi Oba of Japan 3) Yasmin Siraj, United States.

The ladies short program is Thursday and the free skate is Friday.

Men
Half of the men’s competitors are making their JGP debut, including 13-year-old American Savary, who recently finished first in the novice event at Gardena Spring Trophy, and 13-year-old Canadian Nam Nguyen, who has made a splash nationally. Both just became age eligible for the circuit. Savary is the 2010 U.S. Championship novice men’s silver medalist and finished fifth in the junior men’s competition at the 2011 U.S. Championship. Nguyen has won four Canadian Championships over the past five seasons, including the 2011 junior men’s title by almost 25 points.

Among the experienced competitors are Ukraine’s Stanislav Pertsov and Estonia’s Viktor Romanenkov. Pertsov finished 15th at World Juniors. and was 13th and sixth, respectively, at his JGP events in Austria and Czech Republic. Romanenkov also competed at World Juniors, taking 18th. He was eighth in Romania and 11th in Germany on last year’s circuit. A late addition to the competition, China’s Jiaxing Liu, who has a personal best score of 168.65, should also make an impact on the standings. He was 10th at JGP Germany, fifth at JGP Czech Republic and 16th at World Juniors.

Dolensky (Kennesaw, Ga.) enters the competition following a mixed 2010-11 season. While he placed fourth in his Junior Grand Prix debut in Great Britain, he did not qualify for the 2011 U.S. Championships, taking fifth in the junior men’s event at the Eastern Sectional Championships.

Although there are several competitors who have been tested internationally, no man competing in Latvia has an impressive resume yet, leaving room for newcomers. Podium predictions: 1) Jiaxing Liu, China. 2) Timothy Dolensky, United States. 3) Nam Nguyen, Canada.

The men’s short program is Thursday and the free skate is Saturday.

Pairs
While the pairs competition includes several strong pairs in the 12 team field, two Chinese pairs standout from the rest. With a personal best 179.04 points on their resume, and medals from both junior and senior internationals, Sui Wenjing and Han Cong should easily win the competition with teammates Yu Xiaoyu and Jin Yang posing the most realistic threat.

In the 2009-10 season, Sui and Han were golden, taking the top prize not only at their national championship but golds at JGP Belarus, Germany and the Final as well as the World Junior Championships. Last season, the team split their time between junior and senior internationals. They won gold at JGP Germany but were second in Austria. Sui and Han did not compete at the JGP Final because they competed at the senior Grand Prix Final, where they were third. The team was second at Cup of China and third at Skate America. Their season was capped off with a second consecutive World Junior title.

Yu and Jin are building won the gold medal at JGP Czech Republic last season and also claimed the bronze in Austria, the same standing they had at the Final. While Yu and Jin look to have a lock on silver, Russia’s Ekaterina Petaikina and Maxim Kurduykov are hoping to pose a challenge to the Chinese teams. Petaikina and Kurduykov were fifth at JGP Czech Republic last season.

All three American teams are also hoping to pose a threat.

Denney (Ocala, Fla.) and Frazier (Colorado Springs, Colo.) have rejoined after skating together 2005-08. While they never medaled together, Denney and Daniel Raad were the novice pairs silver medalists at the 2009 U.S. Championships. In 2010, Frazier competed with Mandy Garza, winning the bronze medal in novice pairs.

Duarte (Cumberland, R.I.) and Grafton (North Attleboro, Mass.) are the most experienced of the three American pairs, having competed on the JGP for the past two seasons. The team was ninth at JGP United States, their lone assignment in 2009, and finished fifth at 2010 Great Britain and seventh in Czech Republic. Duarte and Grafton were seventh in junior pairs at the 2011 U.S. Championships and claimed pewter as novices in 2010.

Oltmanns (Shakopee, Minn.) and Santillan (Glendale, Calif.) were 11th at JGP Austria last year, their only international assignment heading into Riga. At the 2011 U.S. Championships, the team was 11th in the junior pairs competition. They finished sixth as novices in 2010.

The Americans have talent but the personal bests between them and some competitors make a medal finish unlikely, especially if all competitors are clean. Podium predictions: 1) Sui Wenjing and Han Cong, China. 2) Yu Xiaoyu and Jin Yang, China. 3) Ekaterina Petaikina and Maxim Kurduykov, Russia.

The pairs short program is Thursday and the free skate is Friday.

Ice Dance
Eighteen teams will compete in the ice dance event with Russians Evgenia Kosigina and Nikolai Moroshkin being the favorites. Not only do they have a personal best of 126.92 points, highest of the field, they are also the only dance duo in Riga with international medals. They won gold at both 2010 JGP France and Germany before placing sixth at the Final and at World Juniors.

Andreanne Poulin and Marc-Andre Servant of Canada are looking to medal for the first time internationally after taking fourth in Germany last year, where they scored 118.00. Czech Republic’s Karolina Prochazkova and Michal Ceska are less than two points behind the Canadians, scoring 116.32 at JGP Czech Republic, where they were sixth last season. Prochazkova and Ceska were also ninth in Germany.

Americans Aldridge (Birmingham, Mich.) and Eaton (Bloomfield Hills, Mich.) made their JGP debut last year in France, finishing sixth, and then they improved to fourth in Great Britain. They are the 2010 U.S. Novice Ice Dance Champions and were fifth at the 2011 U.S. Championships in junior dance.

Gamelin and Gamelin, twins from Newark, Del., were 16th at JGP Germany, their only previous international assignment. They were fifth in novice dance at the 2010 U.S. Championships and seventh in juniors last season.

With the short dance being a combination of Latin patterns, older teams will fare better, being able to more naturally show the sultry side of Samba, and that could make the difference. Podium predictions: 1) Evgenia Kosigina and Nikolai Moroshkin, Russia. 2) Andreanne Poulin and Marc-Andre Servant, Canada. 3) Alexandra Aldridge and Daniel Eaton, United States.

The short dance is Friday and the free dance is Saturday.