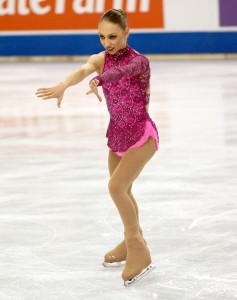 The 2011 International Skating Union (ISU) Junior Grand Prix of Figure Skating Series continues Sept. 7-11 with athletes competing in Brisbane, Australia, at JGP Australia, the first ever JGP event held Down Under. Of the 59 competitors expected to compete in the ladies, men and ice dance events, eight represent the United States: Courtney Hicks and Vanessa Lam in ladies; Jason Brown and Phillip Warren in men; and Lauri Bonacorsi and Travis Mager and Madeline Heritage and Nathaniel Fast in ice dance.

Ladies
Twenty-two young women will compete in the ladies event but three have set themselves apart from the field. Japan’s Risa Shoji and the United States’ Hicks (Chino Hills, Calif.) and Lam (Bellflower, Calif.) are expected to contend for the top prize.

Shoji, who carries a personal best score of 155.23 points into Brisbane, medaled twice on the 2010-11 JGP circuit, winning the gold in Japan and the silver medal in Czech Republic. She finished fourth at the Final. The 15-year-old last competed at the 2011 World Junior Championships, placing fifth.

Known for her lines, spins and program components, Hicks is making her Junior Grand Prix debut with an arsenal of triple jumps including her signature triple flip-triple toe combination. Earlier this year, Hicks won the junior ladies competition at the 2011 U.S. Championships, qualifying for the World Juniors, her first international competition. She was sixth at World Juniors, scoring 49.98 in the short and 100.94 in the free skate for a personal best 150.92.

Lam made her senior debut last season at the U.S. Championships, placing seventh, one spot higher than her placement in the junior event at the 2010 U.S. Championships. She has competed only once internationally, claiming the gold medal at 2010 JGP Czech Republic with 156.41 points.

The ladies short program is Thursday and the free skate is Friday.

Tanaka has a personal best score of 196.98, by far the highest of the competitors in Australia, but has struggled to perform at his best. Last year, he won the bronze at JGP Romania but followed that with a sixth place showing in Great Britain. He was ninth in the junior event last year at the Japanese Championships and 11th as a senior. However, he capped off his season with a silver medal at World Juniors, where he reached his personal best with 64.06 points in the short and 196.98 in the free.

Brown, who has a personal best 185.44, has been turning heads since he followed his novice bronze medal at the 2009 U.S. Championship with the junior title in 2010. Following his national win, he competed internationally for the first time, winning the junior event at the 2010 Gardena Spring Trophy. Brown was second at 2010 JGP France, sixth at JGP Japan and capped off the fall by winning the senior men’s event at the Midwestern Sectional Championship. Earlier this year, he placed ninth in seniors at nationals and followed that with a seventh place showing at World Juniors.

Firus, who finished sixth in the senior event at the Canadian Championships, is looking to rebound in Brisbane from a disappointing performance that left him in 20th place at the 2011 World Junior Championships. He carries a personal best 166.38 points into JGP Australia, a score coming from his bronze medal performance last year in Great Britain. He was fifth at 2010 JGP Czech Republic, seventh at 2009 JGP Turkey and eighth at 2009 JGP Belarus.

Heading Down Under with a personal best 165.12, 14-year-old Lee is looking to make his first JGP podium after a fourth place showing last season in Romania. While he was impressive in Brasov, he missed the mark at JGP Japan, taking 11th, and the World Juniors, where he was 30th.

Brown does not have the resume of Tanaka but has been vastly improving since he won his national title in 2010. Podium predictions: 1) Jason Brown, United States. 2) Keiji Tanaka, Japan. 3) Dong-Won Lee, Korea.

The short program is Thursday and the free skate is Saturday.

Bonacorsi and Mager were second in junior dance at the 2011 U.S. Championships, earning a trip to the World Juniors, where they placed 11th. They own a pair of bronze medals in four JGP assignments, earning them at 2009 JGP United States and 2010 JGP Romania. The team was also fifth at 2010 JGP Great Britain and ninth at 2009 JGP Germany.

They are joined on Team USA by Heritage (Beaverton, Ore.) and Fast (West Linn, Ore.), who competed as juniors at the 2011 U.S. Championships, placing eighth, one spot better than their novice standing in 2010. Heritage and Fast are making their international debut in Brisbane.

Orford and Thomas made a splash last season by claiming the bronze medal in their JGP debut in Great Britain last year. They won the Canadian junior dance title then placed eighth at World Juniors, scoring a personal best 122.22 points, the highest score in this field since the introduction of the two-dance format.

Canada, Russia and the United States have a history of producing successful dance teams and the is likely to continue in Brisbane. Podium predictions: 1) Nicole Orford and Thomas Williams, Canada. 2) Lauri Bonacorsi and Travis Mager, United States. 3) Valeria Loseva and Denis Lunin, Russia.

The short dance is Friday and the free dance is Saturday.