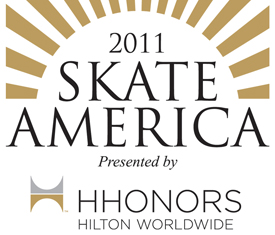 Of the 52 competitors expected across the ladies, men’s, pairs and ice dance fields, 36 represent the United States: Alissa Czisny, Joelle Forte and Caroline Zhang in ladies; Richard Dornbush, Armin Mahbanoozadeh and Douglas Razzano in men’s; Caydee Denney and John Coughlin, Mary Beth Marley and Rockne Brubaker and Tiffany Vise and Don Baldwin in pairs; and Isabella Cannuscio and Ian Lorello, Meryl Davis and Charlie White and Madison Hubbell and Zachary Donohue in ice dance. Czisny as well as Davis and White are the reigning Grand Prix Final Champions while Davis and White are also 2011 World Champions, becoming the first American dance team to ever win the title.

Skate America is the first event of the 2011 circuit. The series, now in its 17th season, consists of six international events in a cumulative, point-scoring format. The top six scoring athletes in each discipline move onto the Grand Prix Final, Dec. 8-11, 2011, in Quebec City, Quebec, Canada, which will be combined with the ISU Junior Grand Prix of Figure Skating Final for the fourth consecutive season.