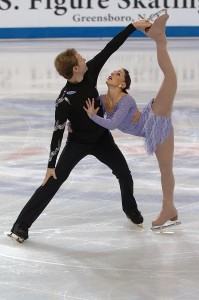 “Today’s performance was quite OK,” Szolkowy said. “We tried to skate like in practice. This is our first competition this year. We’re not as far as other teams in competition, but we showed in the end that [the short program placement] was a result of trying new things. We are still working.”

“It was exciting,” said Denney, who formed her partnership with Coughlin earlier this summer after a successful career with Jeremy Barrett. “It felt great to have the crowd behind us when we finished our program.”

All three American pairs were making their International Skating Union (ISU) Grand Prix of Figure Skating Series debut although all but Marley and Baldwin had skated on the Grand Prix with previous partners.

Debuting their program to the “Pina” soundtrack, Savchenko and Szolkowy started with a throw triple flip and performed side-by-side double toe-triple toe sequences, although the element received a -1.40 GOE. Other elements included a double twist, side-by-side double Axels and a program ending throw triple Salchow. Their Group 3 lift and Group 5 Axel lasso gift received Level 4, along with a spin and the death spiral, while their Group 5 reverse lasso lift was Level 3.

“Our coach came up with this idea in May,” Szolkowy said of the free skate. “He tried to cut the music in a good way and we tried some things. When the movie came out in Germany, we watched. We tried to get some inspiration or feeling for the music and what kind of story we could tell. We worked together with the special ballet coach to show us some ways to move not like typical skaters, more like a dancer. Hopefully that worked. The first things the people said were really good. Hopefully we can improve our elements and our skating so we can show it’s possible to create new programs for new kinds of music.”

Savchenko and Szolkowy did not attempt the throw triple Axel on Sunday, which was the element that cost them a strong standing after the short program.

“We want to try new and different things,” Savchenko said. “Every year we want to develop. We’ve mastered all other triple throws and now we want to take another step and develop further. We want to show you are never too old to learn something new.”

Zhang and Zhang dropped from first after the short program to second overall following a third place skate. Although their opening side-by-side triple toe-double toe-double toe combination was strong, four elements received negative GOE including their side-by-side double Salchows, through triple Salchow and death spiral, which only garnered a Level 1.

With a second place free skate that included an opening side-by-side triple toe-triple toe sequence, throw triple loop and throw triple Salchow, as well as three Level 4 lifts, Moore-Towers and Moscovitch moved from fourth to the bronze medal. Only two of their elements, the triple twist and the side-by-side triple Salchows, received negative marks.

“We are thrilled to be here,” Moore-Towers said. “I find that competing with such established teams pushes us and shows us what the future holds and how we can push. We are still building in our third year. Watching other better teams that have been more places helps me push even harder.”

Denney and Coughlin dropped from second to fourth despite an impressive free skate highlighted by opening side-by-side triple toes, a triple twist, a throw triple loop and a throw triple Lutz. While two lifts received a Level 4 rating, their Group 5 axel lasso lift was only evaluated as a Level 3. She also popped the second double Axel in their planned double Axel-double Axel sequence.

“It was a little [frustrating],” Denney said. “You always want to skate your best and it’s something that I haven’t been training that much back at home, but I’ll just go back and work a little bit harder on that and pay attention to the levels so that each competition gets better and better.”

Despite a music problem that briefly delayed the beginning of their free skate, Vise and Baldwin moved up one spot to finish sixth overall. Their performance was highlighted by a throw triple loop and solid lifts, all of which received Level 4.

“The music mishap at the beginning of the program, I want that to happen every time,” she said. “It got us to relax and it almost felt like practice. It got the crowd behind us and by the time the music started I felt good.”

Vise and Baldwin’s side-by-side triple toe-single toe combination, which was a planned triple-double, received a negative GOE as did their throw triple Salchow.

“There were a couple little mistakes, but they are easy fixes,” Vise said. “That is the type of performance that we have been doing in practice, so it’s nice to go out in competition and compete how we know we can.”

Marley and Brubaker had three falls in their program.

“We had just a few minor mistakes, which comes with it being earlier in the season,” Brubaker said. “We didn’t execute some of the technical elements the way we wanted to. I think skating-wise, the transitions have improved a lot from a month ago at Champs Camp Obviously we want to nail everything and get plus threes, but it doesn’t go like that all the time and I think that in the midst of our  mistakes we did some really nice things. This is one of those experiences we can really learn and grown from.”