The 18th season of ABC’s Dancing With the Stars ended on Tuesday evening with Olympic Gold medalist ice dancer Meryl Davis and her professional partner Maksim Chmerkovskiy winning the coveted mirrorball trophy. In a competition that included Meryl’s on-ice partner Charlie White and Paralympian Amy Purdy among other well-known personalities, it was Meryl and Maks’ chemistry and sheer dancing talent that ended up making them victorious.

As many skating fans will know, in between learning new dances each week for the show, Meryl and Charlie were both simultaneously performing in Stars on Ice shows all around the country. Somehow they managed to not only give their all on the ice, but give their all in the ballroom as well. Charlie was paired with dancing pro Sharna Burgess, and though the pair was eliminated in the week 9 semifinals, he returned each week after that to support Meryl’s efforts.

During the final show, Meryl and Charlie came together and performed a stunning dance that included one of their signature Scheherazade lifts, displaying their ability to work together both on and off the ice. The competition came down to Meryl and Amy after “Full House” actress Candace Cameron-Bure was eliminated, with Meryl and Maks ultimately taking the trophy before being mobbed by the other cast members and pros on the dance floor.

Meryl ended the competition with the highest cumulative score out of any star, a record previously held by 1992 Olympic Gold medalist Kristi Yamaguchi. She and her partner received six perfect scores en route to what became Maks’ first win on the show in 13 seasons.

Figure Skaters Online would like to congratulate both Meryl and Charlie on their incredible accomplishments and hopes that this won’t be the last we see of the two of them dancing together! 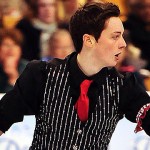