EVERETT, WA–The ladies brought Skate America to a close on a high note Oct. 21. It may be early in the season, but some of these ladies were already fired up and ready to put their best on display.

Japan’s Satoko Miyahara won her second consecutive Skate America gold. She soared from one element to the next with grace and style. The audience was transfixed by her performance and promptly gave her a standing ovation at the conclusion of her free skate.

Skating to “Invierno Porteno” Miyahara landed a total of seven triples along with three doubles. Her spins, choreography sequence and overall presentation was spot on. This was a fantastic start to her season.

“I’m very happy to skate very clean today,” Miyahara said. “But I was a little bit nervous so I would like to be more confident at the next competition.”

Miyahara’s teammate Kaori Sakamoto had an exquisite free skate. She floated across the ice opening with a solid triple flip-triple toe combination. Sakamoto showed a great amount of musicality in the midst of her technical difficulty. In the end, she only trailed behind Miyahara by three points. She won her second consecutive Skate America silver medal with an overall score of 213.90 points.

“I’m very satisfied with the performance today and this will definitely bring me encouragement for future performances,” Sakamoto said. “Before Skate America I really practiced hard in the morning and in the night time and that gave me a great confidence.”

Claiming the bronze medal in her Grand Prix debut was Russia’s Sofia Samodurova. Samodurova skated last, following Miyahara’s free skate. She must have nerves of steel because she went out there and performed with youthful charisma and energy seemingly unintimidated by the skater before her.

“I was shocked at being third because it’s my debut,” Samodurova said. “I’m so happy and my coach is happy too.”

U.S. Champion Bradie Tennell rebounded in her free skate moving up from fifth in the short to fourth place overall. Her landings were not entirely without error, but she managed to perform six triples along with two doubles. Her program is certainly an improvement from last season as she was able to show more maturity and refinement.

“I went out there with one goal and that was to do my job and to fight for everything and not let anything go,” Tennell said. “I really fought for everything in that program and I’m very happy with my fight and my attack. I’m very proud of what I did.” 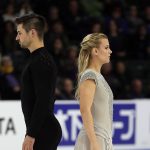 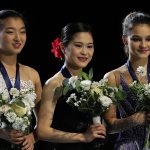