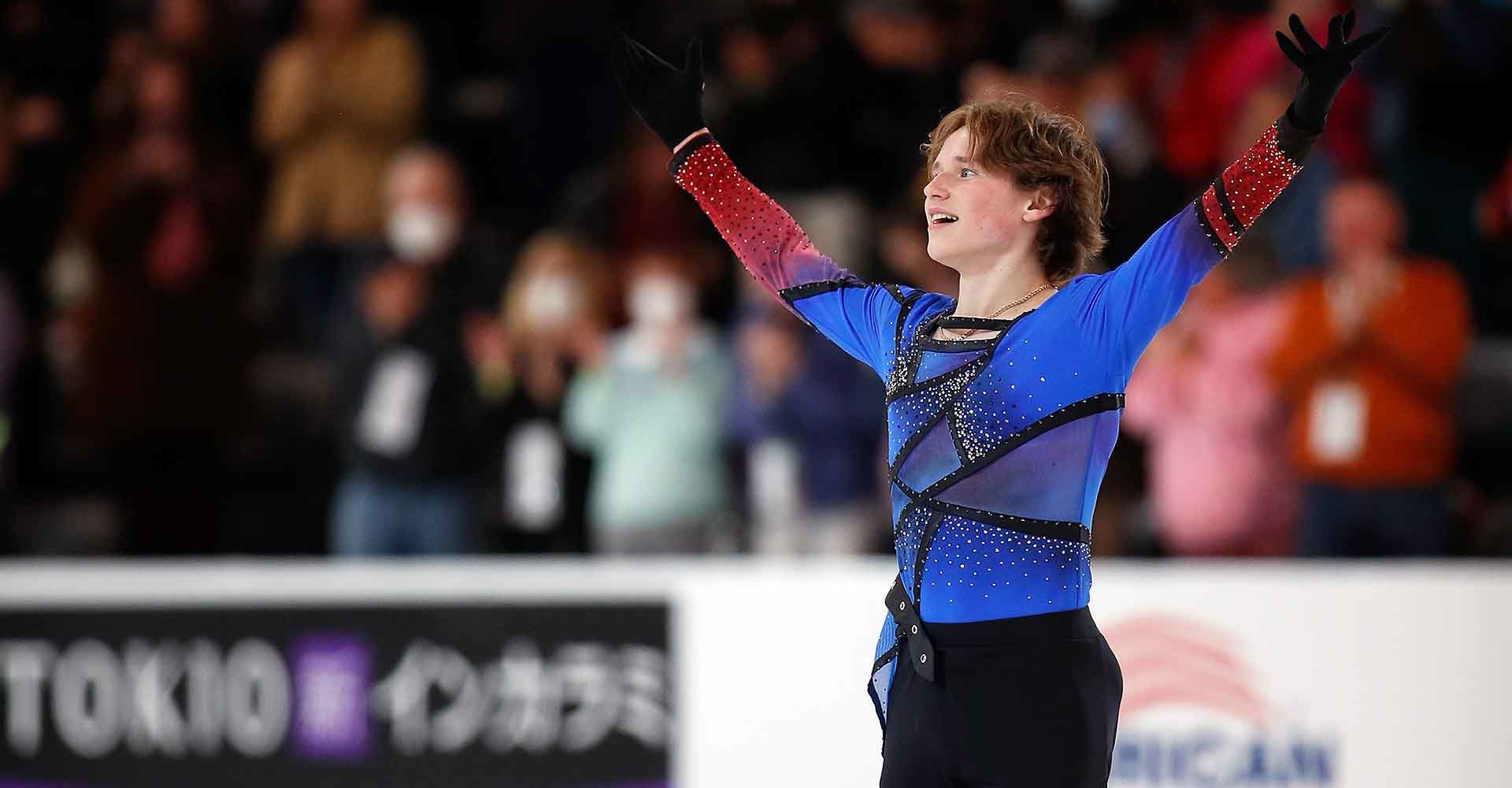 The 2022-2023 International Skating Union (ISU) Grand Prix Series got underway Oct. 21 with the first event of six — Skate America, which took place inside the Skating Club of Boston in Norwood, Mass. 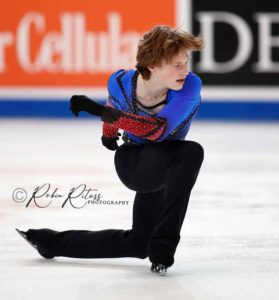 After finding himself in fourth place after the short program, World Junior Champion Ilia Malinin decided to add his “not-so secret weapon” to his free skate — the quadruple Axel. Malinin made history by becoming the first person to land a quadruple Axel in competition last month at the U.S. Classic in Lake Placid.

In front of a soldout crowd at The Skating Club of Boston, Malinin delivered an effortless quadruple Axel, which garnered 16.61 points from the technical panel and almost 15 seconds of pure elation from the crowd in Norwood. Malinin’s Euphoria free skate also consisted of four other quadruple jumps, as well as a triple Lutz-triple Axel sequence that earned 16.66 points. His skate wasn’t perfect as he fell on his quadruple Lutz-Euler-triple Salchow combination.

“It was a really good skate,” he said following the free skate. “I’m still in shock – I don’t know how I pulled it (the quadruple Axel) off. I trusted in my practice and it worked well.”

Malinin will compete at the Grand Prix of Finland where he will look to qualify for his first Grand Prix Final. 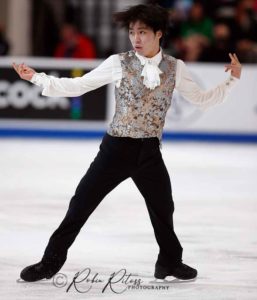 Japan’s Kao Miura, who was the leader after the short program, needed to earn a free skate score of 185.42 to hold onto the top spot. The 2022 Japanese Junior champion fell on his opening quadruple loop, but managed to regain his composure to complete three other quadruple jumps in his “Beauty and the Beast” free skate. He earned a personal best free skate score of 178.23 and a personal best total score of 273.19 to win the silver medal, his first Grand Prix medal.

“ I was able to do very well here (at Skate America) because I was in good form coming in. There was some mistakes today, so it gives me something to work on for the next one,” Miura told the media following his free skate.

Miura will compete next week at Skate Canada International. 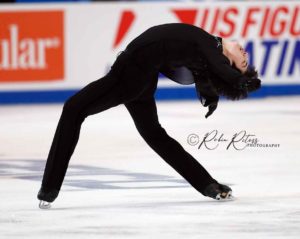 Korea’s Juhnwan Cha, who celebrated his 21st birthday while at Skate America, finished in third place. In second place after the short program, Cha’s “James Bond” free skate included four quadruple jumps. Cha, who just won gold at Finlandia Trophy, fell on his triple Axel and received an under-rotation call on the triple Salchow of his triple Axel-Euler-triple Salchow combination.

“I’m quite happy with today – it wasn’t perfect, but I was fighting til the end,” he said. “I can work on more for the next Grand Prix.”

Italy’s Daniel Grassl, who trains at the Skating Club of Boston, dropped from third after the short program to finish just off the podium in fourth place. Canada’s Roman Sadovsky and Wesley Chiu rounded out the top six, finishing in fifth and sixth place respectively. 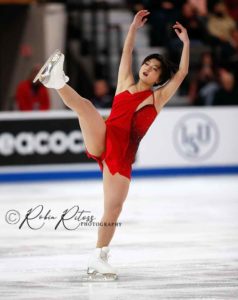 After the short program, less than a point separated the World champion and World junior champion. But it would be the World champion Kaori Sakamoto, of Japan, that would come out on top – winning her first Skate America gold medal in five appearances.

In her Sia free skate, Sakamoto had only one mistake, which was receiving an under-rotation call on her triple toe of her double Axel-triple toe combination. Her free skate score was 145.89, and she received a total score of 217.61.

“This is actually my 5th time to come to Skate America, and my first time to win a gold medal, so I’m really delighted with that, ” Sakamoto said.

Sakamoto will now compete at NHK Trophy where she attempt to qualify for her second Grand Prix Final. 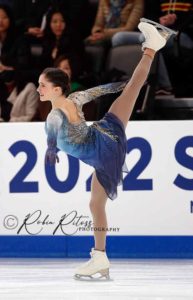 Team USA’s Isabeau Levito’s free skate did not go as well as her short program did, but she skated well enough to claim the silver medal, her first Grand Prix medal in her senior Grand Prix debut.

The World Junior Champion struggled with her triple-triple combination in her “Dulcea Si Tandra Mea Fiara” free skate. She couldn’t get the triple toe on her opening triple Lutz-triple toe combination. When she attempted it later in the program, the triple toe was called on the quarter. She earned a free skate score of 135.36 and a total score of 206.66.

“I believe this is all pretty much mental,” she admitted. “You can never be 100% the way in competition that you are in practice.” 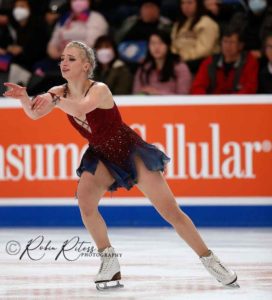 Team USA’s Amber Glenn had a great weekend in Norwood, winning her first Grand Prix medal – a bronze. In her “Without You” by Ursine Vulpine & Annaca free skate, Glenn attempted her triple Axel, but the jump was called under-rotated. Her only other mistake was the triple toe of her triple flip-triple toe combination was called on the quarter. She earned a free skate score of 129.19 and a total score of 197.61 to claim the bronze medal.

I’m still happy to win my first Grand Prix medal,” Glenn said.  “It was the highest (free skate) score I got since last Skate America.”

Glenn will compete at NHK Trophy next month. 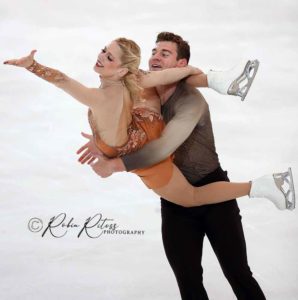 In first after the short program by a little more than 2 points, Knierim and Frazier’s free skate to Harry Styles “Sign of the Times” and “Healed Broken Wings” by Karl Hugo included a triple toe-double toe combination. Knierim fell on the throw triple loop and two-footed the landing of the throw triple flip, both uncharacteristic mistakes for Knierim. They also doubled their planned side-by-side triple salchows. They earned a free skate score of 126.20 and a total score of 201.39.

“Tonight was a fight, a lot of grit out there tonight. I’m proud of Alexa and I for just trusting each other to get through that program. It’s a starting base for us,” Frazier said of their free skate. “We left a lot of points on the table.” 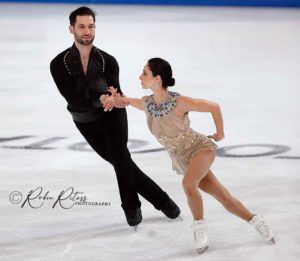 In their Cleopatra free skate, Stellato-Dudek and Deschamps received no negative GOEs for their elements, which included triple toe-double toe combination and throw triple flip and loop jumps. Like Knierim and Frazier, they doubled their planned side-by-side triple salchows.

Stellato-Dudek and Deschamps will compete at the Grand Prix de France in two weeks.

Fellow Canadians Kelly Ann Laurin and Loucas Ethier, who were in fourth after the short program, won the bronze medal in their first Grand Prix event. Their free skate earned a score of 104.35, which was a new personal best, and a total score of 156.94, also a new personal best. 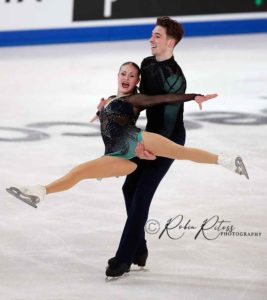 “I think just being in the last warmup, that was already a big deal for us. We didn’t expect it all,” Ethier admitted. ” It was super motivating for us to skate with these guys (Knierim/Frazier and Stellato-Dudek/Deschamps), and for the crowd and everything. I think it was a fight, but it was the best we could do today so we are really happy with that.”

Laurin and Ethier compete next week at Skate Canada.

Team USA’s Maria Mokhova and Ivan Mokhov, the brother and sister team from Michigan, finished in fourth place in their Grand Prix debut. The team was the last minute replacement for Anastasiia Smirnova and Danil Siitanysia, who withdrew a few days before the competition. Following the conclusion of Skate America, Mokhova and Mokhov learned that they were given a second Grand Prix – Grand Prix de France. 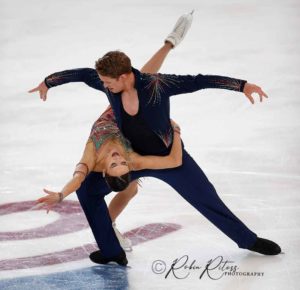 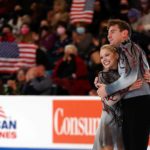 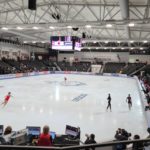