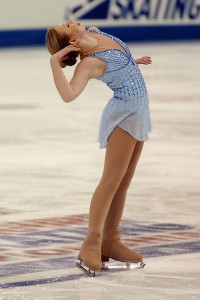 After the first day of competition at the inaugural World Team Trophy, the United States team is leading five other nations. The competition is April 16-19 in Tokyo.

Team USA has 48 points after the completion of the original dance, men’s short program and ladies short program. Japan is second with 43 and Canada is third with 39.

World Champion Evan Lysacek finished second in the men’s short program with a season’s best 83.70 points. In his performance to “Bolero,” he landed a triple axel, triple lutz-triple toe combination and finished with a triple flip.

Jeremy Abbott, who followed his win at the Grand Prix Final with a gold medal from the U.S. Championships, is currently fifth with 71.27. He fell on his triple axel and stumbled later in the program.

In the ladies short program, U.S. bronze medalist Zhang scored 58.88 points for a fourth place standing heading into the free skate. She finished second at the World Junior Championships but did not compete at Worlds.

Flatt scored 58.40 for her short program, putting her in fifth place. The two-time U.S. silver medalist, who finished fifth at the recent Worlds, landed triple flip-triple toe, triple lutz and a double axel.