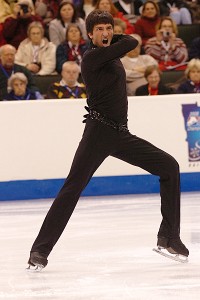 Evan Lysacek will compete for the first time as World Champion April 16-19 when the inaugural World Team Trophy comes to Tokyo, Japan.

Lysacek and seven of the United States’ best skaters will challenge teams from Canada, China, France, Japan and Russia for the team title. Each team consists of two ladies, two men, one pairs team and one ice dancing team.

All ladies, men’s and pairs competitors will skate a short program and a free skate, and all dance teams will perform an original dance and a free dance. Through an event-specific scoring system, the team earning the highest number of aggregate points will be the winner.

The strongest challengers to the USA, which qualified for the event with the highest point total, are expected to be the teams from Canada and Japan, which qualified with the second and third highest total points.