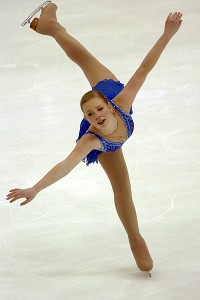 “I’ve said this whole week I’m very proud of my team. They did a wonderful job. I think this is going to be a very memorable competition for everyone who participated, because it was the first of hopefully many,” said Lysacek, the team captain. “I think it was very successful.”

In their free skate to “Spartacus,” which scored a 101.66, Denney and Barrett received a positive grade of execution on both throw triples, a lutz and a loop. They had trouble on their side-by-side jumps, getting only three tenths of a point for the double toes and 1.08 for the single axel-double toe sequence.

“Above and beyond any team’s or any person’s performance here, I think we are all proud and all impressed with level of competition that was brought here to Tokyo after the world championships concluding just two weeks ago,” he said. “So it was a great test event to the importance of this competition, and, obviously, we thank the ISU and Japan for hosting it.”