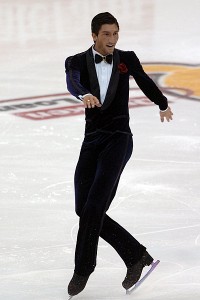 The United States is leading after two days of action at the inaugural World Team Trophy in Tokyo. The competition wraps up Saturday with the pairs free skate and ladies free skate.

World Champion Evan Lysacek led the charge on the men’s side. He recorded 238.56 points for his overall performance, which contributes 12 points to Team USA’s standing.

Skating to “Rhapsody in Blue,” the same program that he used to win Worlds last month in Los Angeles, he landed eight triple jumps and four double jumps. Among the passes were a triple lutz-triple toe combination, a triple axel-double toe and a triple flip-double toe-double toe.

U.S. Champion Jeremy Abbott, who won the Grand Prix Final earlier this season, finished fifth with 205.05. His standing contributes eight points to Team USA, which is competing against teams from five other nations including China, France and Russia.

Abbott started his performance with a quadruple toe, something Lysacek did not attempt because of an ailing stress fracture. He went on to land a triple flip, single axel, triple Salchow, single axel-double toe, triple lutz-triple toe-double toe and triple loop. He fell on the final triple axel.

In the pairs short program, U.S. silver medalists Caydee Denney and Jeremy Barrett finished third with 56.58. The team performed a double twist then landed side-by-side triple flips, although she stepped out of the landing, and a throw triple loop.

With Lysacek winning the men’s competition and World silver medalists Tanith Belbin and Ben Agosto taking the top spot in ice dance, Team USA has 59 overall points heading in to the final day of competition. Canada (55) and Japan (52) follow.

The team competition concludes Saturday with the pairs free skate and the ladies free skate.