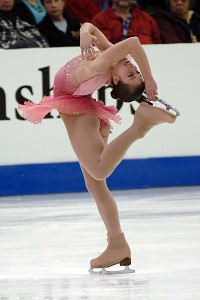 And she is taking two Grand Prix medals with her.

After more than three weeks on the road, Wagner claimed the bronze medal Saturday at the NHK Trophy in Nagano, Japan, placing behind 2007 World Champion Miki Ando of Japan and 2009 World Junior Champion Alena Leonova of Russia. The three finished with 162.55 points, 160.85 and 155.99 respectively.

Reigning Junior Grand Prix Final Champion Becky Bereswill finished 11th overall with 118.42 points. In her 8th place free skate, which was highlighted by three Level 4 spins and another Level 3 spin, she performed only one triple jump that did not receive a negative grade of execution. Bereswill also did not perform a combination.

The same trio made the podium two weeks earlier at the Rostelecom Cup in Moscow, Russia. Ando also won the Rostelecom gold medal while Wagner was second and Leonova claimed the bronze medal in the Russian Grand Prix.

Leonova won the Japanese crowd over with her sparkling “Chicago” program that featured five clean triple jumps. Although she stepped out of her triple toe-triple toe combination and had a wobbly triple Lutz, she still won the free skating portion over Ando, who under rotated and two-footed her opening triple Lutz. Ando also fell on the double loop in her triple toe-double loop.

Skating to “Polovetsian Dances,” Wagner turned in a program that scored 99.45 points, ranking her third in the free skating portion of the NHK Trophy. She had a minor bobble on her opening triple flip-double toe but recovered with a nice triple loop and double Axel in the opening half of her program.

She lost her momentum in the second half of the program, making three mistakes in her jumping passes, including stumbling her triple Salchow and bobbling the double Axel in the double Axel-triple flip sequence. Wagner, who was third at the World Junior Championships behind Leonova, also singled her triple Lutz.

“It wasn’t the best program, but I still accomplished some of the goals that I wanted to accomplish here,” Wagner said. “I’m on the podium, so I’m pretty happy with that overall. Going through the program, I think I just was a little bit tired. I’ve been on the road for three weeks. By the time I got to the long program it’s been a long trip.”

After the Rostelecom Cup, Wagner headed to Graz, Austria, to train while her coach Priscilla Hill instructed other students in the Ice Challenge international compeition. She flew from Austria to Japan but missed all three connections because of delays.

Ando is the first woman to qualify for the 2009 Grand Prix Final. With two-events remaining, including the second event of Trophee Eric Bompard Champion Yu-Na Kim of Korea and Cup of China Champion Akiko Suzuki of Japan, Leonova is second in the Grand Prix Final standings and Wagner is third. Japan’s Mao Asada and Yukari Nakano are fourth and fifth.

“I stood in the middle of the podium for the first time [at NHK Trophy], but I’m not really happy, because my free skating wasn’t competitive,” said Ando, who was second to Leonova in the free program. “I am pleased to be in the Final and I will train hard for it and try to become stronger mentally. I’m looking forward to the Finale in Tokyo, so I can show the people in Japan a better performance.”