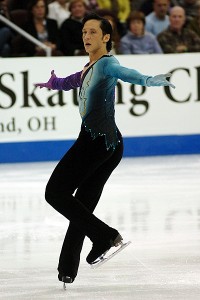 Johnny Weir redeemed himself from a lackluster performance at the Rostelecom Cup earlier this season by winning the silver medal Saturday at the NHK Trophy in Nagano, Japan. With a score of 217.70 points, he finished on the podium with France’s Brian Joubert (232.70) and Czech Republic’s Michal Brezina (217.48).

“I was very happy that I was able to push through this week,” said Weir, who caught a sinus infection on the flight from New York to Tokyo. “It is definitely a medal well earned. Of course there were mistakes that shouldn’t be made later in the season. [Competing in spite of illness) will help me immensely in the season, because I had this very stressful and difficult situation behind me and I came out with a medal.”

Performing his “Fallen Angel” program, the third ranked free program, Weir landed seven triple jumps including a triple Axel-triple toe combination and a triple Lutz in combination with double toe. His second triple Axel, the solo jump, received a slight negative grade of execution as did his intended triple loop, which he popped into a single.

Weir had two Level 3 step sequences. While his first two spins were Level 4, his final was only a Level 1.

He received a variety of levels for his non-jumping elements. One spin was Level 4, one was Level 3 and one was Level 2 while his step sequences, circular and straight line, were both judged as Level 2.

“We have to take little steps to achieve a bigger goal,” the 2009 U.S. Champion Abbott tweeted following his performance. “Today I tripped, but I will dust myself off and keep marching towards my dream.”

Three of Rippon’s spins received a Level 4 while both step sequences were Level 2.

With two events remaining, only Japan’s Nobunari Oda has a guaranteed spot in the Grand Prix Final, which will include the six top performers on the circuit. Joubert is in second place in the point standings while Weir is third and Rippon is sixth. Athletes who still have one event remaining include Abbott, Brezina, Evan Lysacek and Tomas Verner.

Lysacek won the silver medal at Cup of China while Verner won silver at Trophee Eric Bompard. Both men are among the favorites for the gold medal at the next Grand Prix event, Skate America. Abbott and Brezina square off in Canada, along with Japan’s Daisuke Takahashi, who was fourth at NHK.