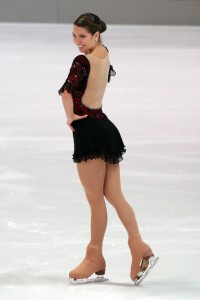 Alissa Czisny was at her best on Friday.

After setting a personal record 63.52 points in the Skate Canada short program in Kitchener, Ontario, Canada, the 2009 U.S. Champion is in second place, behind World Championship silver medalist Joannie Rochette (70.00). Mirai Nagasu is third place with 56.34.

“I’m happy with my scores,” said Czisny, who had a previous personal best of 58.54 from 2005 Skate Canada, which is the only Grand Prix she has won. “It was my best performance of the season.”

Performing to selections from the soundtracks of Legend of Zorro and Mask of Zorro, Czisny landed a triple Lutz-double toe combination, a triple flip and double Axel. But the highlight of her program might have been the Level 4 layback spin and the Level 3 combination spin, both which were fast and well centered.

“I really just tried to go out there and skate my best tonight,” said Czisny.  “I think my free program at the last competition [Rostelecom Cup] was alright but I think I learned a lot from that program. I’m going to add [what I learned from Rostelecom Cup] to this competition tomorrow – just to go out and to stay with each jump.”

Nagasu’s playful program to “Pirates of the Caribbean” included a triple Lutz-double toe and a double Axel, although she received an edge deduction for the wrong take off on the triple flip. “My jumps were a lot better than in China (Cup of China), although my points are not higher, and I felt more confident in my skating,” the 2008 U.S. Champion said.

Caroline Zhang is currently seventh with 54.58.