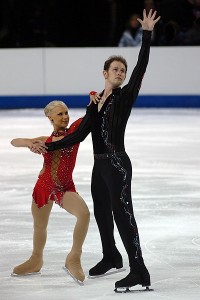 Caydee Denney and Jeremy Barrett are in fifth place after the short program at Skate Canada in Kitchener, Ontario, Canada, while their American teammates, Caitlin Yankowskas and John Coughlin, are currently in sixth place. The teams have 55.46 points and 52.42 respectively.

World Champions Aliona Savchenko and Robin Szolkowy of Germany captured the pairs short program with a new personal  best score of 74.16, which is just short of the world record 74.36, set by the Chinese duo Dan Zhang and Hao Zhang in 2008. Russia’s Maria Mukhortova and Maxim Trankov (65.80) and Canada’s Jessica Dube and Bryce Davison (57.90) came in second and third.

Skating to “Firebird,” the same music used by World Champion Evan Lysacek for his short program, Denney and Barrett performed a throw triple Lutz and triple twist, but Denney touched a hand down on the landing of their side by side triple toes. He also two footed the landing of his jump.

Yankowskas and Coughlin were solid technically, except for out of sync side by side spins, but points were lost on the program components mark. The pair, who train in Colorado Springs, Colo., started with a triple twist then performed a throw triple Salchow. They also landed side by side triple toes.

Lysacek: Mirai Nagasu ‘has something special’