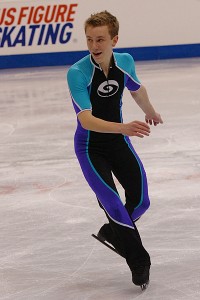 Ross Miner could come away from his first Junior Grand Prix Final with some hardware. After a solid performance to selections from Carmen on Thursday in Tokyo, Japan, Miner trails China’s Nan Song by less than one point.

Song, who started his program with a triple Lutz-triple toe combination and then added a stellar triple Axel that one judge awarded a three for grade of execution, has 71.70 points heading into the free program. Miner has 70.85 while Japan’s Yuzuru Hanyu has 69.85.

Miner started his performance with a shaky triple Axel that received a negative grade of execution but only improved from there, landing a steady triple Lutz-triple toe and triple flip. Two spins were Level 4 while another was Level 3. For his footwork, he received Level 3 on the straight line and Level 2 for the circular.

Grant Hochstein is in fourth place with 66.45 after landing a triple Lutz-triple toe, although the lutz received a warning for the wrong takeoff edge, a double Axel and a triple flip. All of his non-jumping elements were rated Level 3.

Richard Dornbush finished with 59.35. Although his program started with a stellar triple lutz-triple toe, he performed a double Axel and later a double flip, which put him sixth of eight overall.