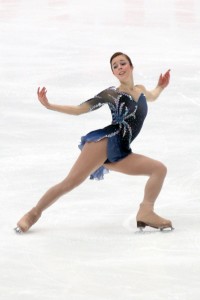 Ashley Wagner is in sixth place following the short program at the Grand Prix Final on Friday in Tokyo, Japan. She scored 54.26 points, well off the personal best 61.52 she received at the 2008 NHK Trophy last season.

“I always expect perfection of myself, so I’m disappointed, but mistakes are not the end of the world,” said Wagner, the only American woman to qualify for the Grand Prix Final this season. “I am making progress.”

After starting with a shaky triple flip-double toe combination, she performed a triple Lutz, which received a deduction for taking off on the back inside edge rather than the back outside edge. Her double Axel was also downgraded for under rotation.

Following the ladies short program, U.S. Champions Meryl Davis and Charlie White became the first American dance duo to win the Grand Prix Final, taking the gold medal by more than a point over Canadians Tessa Virtue and Scott Moir. Davis and White finished with 169.44 while Virtue and Moir, who won the free dance, had 168.22.

“It’s been a really great season so far and we’ve been feeling great in all competitions,” said Davis, who with White won their two Grand Prix events this season. “The performance went pretty good today. I think that we can definitely skate a lot better and going home we’re going to look through that.”

France’s Nathalie Pechalat and Fabian Bourzat were a distant third with 147.62.

For the third competition this season, Kim, who holds world record score in the short program, free skate and overall, had problems with the triple flip jump, popping it into a single. She also had the second jump in her opening triple Lutz-triple toe downgraded to a double.