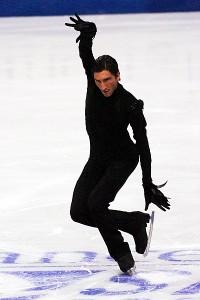 Heading into the Grand Prix Final in Tokyo, Japan, Evan Lysacek’s goal for the short program was to break 85-points for the first time in his career. A personal best short program performance to “Firebird” made it mission accomplished for the 2009 World Champion.

“This was a good warmup for me,” said Lysacek, who narrowly trails Japan’s Daisuke Takahashi 89.95 points to 89.85. “I’ve been working hard to overcome the barrier of 85 in the short program and was pleased I could do that tonight.”

Nobunari Oda of Japan, who has set two of the four highest scores this season, is currently in third place 87.65, a personal best. Reigning Grand Prix Final bronze medalist Johnny Weir secured fourth place with a personal best 84.60 while the defending champion, Jeremy Abbott, is fifth with 76.65.

Takahashi, making a comeback from a right knee injury that kept him out of competition last season, opened with a triple flip, triple toe combination. He also landed a triple Axel and a triple Lutz, and performed two Level 4 spins and two Level 3 step sequences, en route to a personal best.

Lysacek was equally as impressive with his display. After starting with a triple Axel, he nailed a triple Lutz-triple toe, awarded a positive grade of execution of 2, the same that Takahashi scored on his combination. Lysacek also landed a triple flip before going into a Level 3 circular step sequence. Two of his spins were Level 4, another was Level 3, and his crowd pleasing straight line steps were also Level 3.

“For the last two seasons, I’ve been trying to break 85,” Lysacek said. “I think the closest I’ve come was 83 and 84. So to not just break it, but to go up to almost 90 points, is really a great improvement for me, and I think it’s reflected a lot in the components score. I’ve been working so hard technically making these elements so strong, not just execute them.”

The difference between the two could have been the American’s error on a normally strong element.

“I did have a bobble on the death drop,” said Lysacek, who qualified for the Final by placing second to Oda at Cup of China and winning Skate America. “It was a definitely a rut I hit on the ice. I should have ignored it and changed edge [as planned].”

Weir sold his rumba themed program but encountered some technical problems. Following the opening triple Lutz-triple toe, which received a positive grade of execution, he performed a solid triple Axel but faltered on the triple flip, receiving a warning for the wrong take off edge. The flip earned him a negative grade of execution, the only element with such a rating among the top four men.

He was otherwise sound with two Level 4 spins, a Level 3 spin and two Level 3 step sequences.

“I’m happy with the way the program went today,” said Weir, who was fourth at Rostelecom Cup and second at the NHK Trophy. “The crowd reaction was really wonderful for me. I’m happy with such a high score in an international event, so today was a success – definitely.”

Reigning U.S. Champion Abbott, who won Skate Canada two weeks ago to secure a spot in the Final, was the only man to fall in the competition, faltering on the triple Lutz, the third jumping pass of his program. He landed a nice opening triple flip-triple toe in his performance to “A Day in the Life” by the Beatles but then had problems with his triple Axel, stumbling on the landing, and botched the Lutz.

On Thursday, the Grand Prix Final kicked off with China’s Xue Shen and Hongbo Zhao, two-time Olympic bronze medalists, setting a new standard in the pairs competition. They earned a world record 75.36 points, surpassing their previous world record mark, for their performance to “Who Wants to Live Forever,” which featured a triple twist, throw triple loop and side-by-side triple toe loops.

Two-time World Champions Aliona Savchenko and Robin Szolkowy trail with 73.14 for their “Send in the Clowns” program. Russians Maria Mukhortova and Maxim Trankov set a new personal best, 68.04, putting them in third place heading into the free skate.

In the original dance, U.S. Champions Meryl Davis and Charlie White, performing an Indian folk dance, continued their campaign for an Olympic medal by taking 65.80 to 64.01 lead over World bronze medalists Tessa Virtue and Scott Moir, who were solid with a Flamenco. Nathalie Pechalat and Fabian Bourzat of France are third with 56.93.