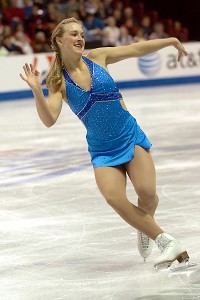 Former World Champion and reigning bronze medalist Mao Asada of Japan rebounded from a disappointing short program to claim the gold in the ladies event at the Four Continents Championship in Jeonju, Korea, with 183.96 points. Japan’s Akiko Suzuki (173.72) won the silver medal while the United States’ Caroline Zhang (160.78)  captured the bronze.

Amanda Dobbs (158.23), who was sixth in her debut at the 2010 U.S. Championships in Spokane, Wash., dropped from second to fourth overall behind a fifth place free skate, which included a fall on the triple flip. Alexe Gilles was the lowest placing American, coming in ninth with 140.88.

Skating to the powerful Prelude op 3 “Bells of Moscow” by Sergei Rachmaninov, Asada nailed her two triple Axels as well as four triple jumps and showed difficult spins to post a seasons best of 126.74 points.

“I am satisfied with today’s performance and I think it will be good towards the Olympic Games,” Asada said. “I am very happy that I tried two triple Axels and to have done them will help me at the Olympic Games.”

Suzuki’s lively performance to “Westside Story” included six triple jumps, but the triple Lutz was shaky. She also popped a planned triple loop. With a score of 114.84 points (62.20/52.64), the Grand Prix Final bronze medalist was
ranked second in the free skate. It is Suzuki’s first medal at an International Skating Union (ISU) Championship. She had finished 8th in her two previous appearances at Four Continents in 2009 and 2002.

“This is the first time I was first after the short program in a (major) international event, but I didn’t want to think about that,” she said. “I just wanted to perform the ‘Westside Story’. I missed one jump, and there were some little mistakes, but stayed focused until the end. That was good.”

Zhang completed five clean triples and strong spins in her routine to ‘The Nutcracker’. Her only mistake came when she stumbled on an underrotated triple Lutz. The 16-year-old earned 105.68 points to pull up to the podium, overtaking her American teammate Dobbs.

“I think it was a pretty good overall performance,” Zhang said. “The mistake on the Lutz was surprising and confusing. I didn’t even rotate at all. That could have been a lot better. But I’m really happy with how I placed here. I didn’t expect to be so high. It’s a pretty good comeback from how I skated at nationals. I didn’t expect any international assignments after nationals and I tried to make the best out of the opportunity and I think I did pretty well.”

In the ice dancing event, Kaitlyn Weaver and Andrew Poje of Canada danced to their first gold medal in an ISU Championship, taking the top spot with 166.16 points. The silver went to Allie Hann-McCurdy and Michael Coreno (159.56), also from Canada, while Madison Hubbell and Keiffer Hubbell (154.20) earned the bronze, although they were fourth in all three dances.