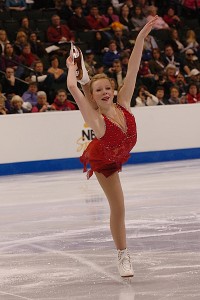 It was not an ideal first day at the Four Continents Championships in Vancouver, Canada, for a few members of Team USA, as uncharacteristic mistakes cost them top spots after the short program.

After the pairs short program, two-time U.S. Champions Keauna McLaughlin and Rockne Brubaker are in seventh place. Alissa Czisny, in her first appearance since winning the U.S. Championship, is seventh in the ladies event while U.S. silver medalist Rachael Flatt is currently eighth.

McLaughlin and Brubaker, skating in their first International Skating Union championship, started strong with a Level 4 combination spin and followed that with a Level 4 lift. They received negative grades of execution on their side-by-side double Salchows but regained their edge on the triple twist and two Level 4 spins.

But the pair faltered when McLaughlin went down on their throw triple loop at the end of their “Malaguena” short program. The lost points brought their overall score to 54.16 points, which was good enough for seventh place after the first portion of the event.

The leaders are the 2006 World Champions Qing Pang and Jian Tong (65.60). Trailing in second and third are Canada’s Jessica Dube and Bryce Davison (64.36) and Pang and Tong’s Chinese country mates Dan Zhang and Hao Zhang (63.20).

Americans Rena Inoue and John Baldwin, the two-time U.S. Champions who placed third at the recent nationals, are fifth with 56.78. U.S. silver medalists Caydee Denney and Jeremy Barrett have 53.60, putting them in eighth place heading into the free skate.

In the ladies competition, U.S. bronze medalist Caroline Zhang finished fifth in the short program with 58.16, the highest score among the three American entries. Her technical elements were solid with the exception of the downgraded triple toe in her attempted triple flip-triple toe combination.

Czisny finished seventh in the short program with 55.62 points, putting her about two points behind World Champion Mao Asada of Japan, who managed only a sixth place finish after doubling her lutz. Asada also received Level 2s on her usually strong spins.

The newly crowned U.S. Champion not only had her triple flip receive an edge warning but it was also downgraded to a double. The highlights of her program included a solid double axel, three Level 4 spins and footwork and spiral sequences that were awarded a Level 3.

Flatt (55.44) started with a triple flip-triple toe combination, although the triple toe was downgraded to a double. She received an edge alert for her triple lutz but had no problems with her solid double axel, which received a positive grade of execution.

In her performance to “Moon River” by Henry Mancini and “Piano Concerto No. 2” by Sergei Rachmaninov, she received two Level 4s, two Level 3s and a Level 2 for non-jumping elements.

Korea’s Yu-Na Kim won the short program with 72.24 points, the highest score ever awarded for a ladies short program under the International Judging System. She opened with a solid triple flip-triple toe combination that received an edge warning for the first jump.

Kim performed a flawless triple lutz, which one judge awarded with the highest grade of execution, and a double axel. With the exception of her straight line step sequence, valued at a Level 3, all of her non-jumping elements were judged as a Level 4.

American silver medalists Emily Samuelson and Evan Bates are currently fourth with 31.41. Kimberly Navarro and Brent Bommentre, who captured the bronze medal at U.S. nationals, finished with 30.59, which put them into sixth after the first of three dance events.