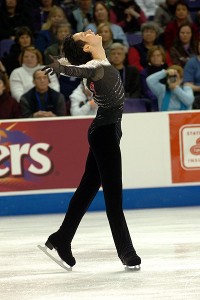 Johnny Weir is the three-time U.S. Champion. He finished third at the 2010 U.S. Championships in Spokane, Wash., to earn his second trip to the Olympic Winter Games. Last season, Weir struggled, finishing fifth at nationals and missing the World Championships, despite being the reigning bronze medalist. He is on track this season, having medaled at three consecutive events. Here is what you need to know about Weir heading into the 2010 Olympic Winter Games in Vancouver, Canada:

Getting his start Weir began skating at age 12 after watching 1994 Olympic Champion Oksana Baiul on television. Weir’s first venture onto the ice occurred one harsh winter when the corn field behind his house froze over. Weir received a second-hand pair of skates for Christmas, and to his parents’ amusement, he used them to skate in between the frozen corn stalks. They soon signed him up for group lessons at the University of Delaware.

International personal bests He set all three of his personal bests at the 2009 Grand Prix Final. He scored 237.35 points overall. His short program received 84.60 and his free skate was awarded 152.75.

Must have move For Weir, his success comes down to two main things: will he let himself do what his body has trained to do and blend that technical skill with the passion he is not afraid to show off the ice, or will a double toe loop be his downfall yet again? He has lost more than one title by omitting the double toe, including the 2008 U.S. Championship.

Be Good Johnny Weir Since the 2006 Olympics, Weir has had his every move documented by filmmakers James Pellerito and David Barba. The two produced a documentary called “Pop Star on Ice,” which led to Weir’s eight-part reality show called “Be Good Johnny Weir”. The show premiered Jan. 18 on the Sundance Channel and will be available on iTunes in mid-February.

Faux not fox Weir’s free skate costume at the 2010 nationals included a patch of real fox fur. After numerous pressures, including a letter from Friends of Animals and threats from other animal activists, Weir obliged to wear faux fur at the Olympics. “I made this decision after several threats were sent to me about disrupting my performance in the Olympic Games and my costume designer, Stephanie Handler, was repeatedly sent messages of hate and disgust,” Weir said in a statement. “I do not want something as silly as my costume disrupting my second Olympic experience and my chance at a medal, a dream I have had since I was a kid.”

High fashion The aspiring fashion designer, who has a Korean fashion line called “Be Unique,” wants a Fashion Institute of Technology degree. He has modeled on the runways including for Heatherette at New York’s Fashion Week. Weir also posed for BlackBook magazine wearing heels.

Camille For his short program in the 2005-06 season, Weir skated to Camille Saint-Saens’ “The Swan” wearing an elaborate costume that resembled a swan. On his hand, he wore an orange glove that represented the beak. “His name is Camille – two ‘l’s,” Weir said about the glove. “I think he’s my evil side. When I skate badly, I blame it on my glove.”

Start the bus At the 2006 Olympics, he placed second in the short program, behind the eventual gold medalist Evgeny Plushenko, but finished in fifth place overall after a disappointing free skate. “I missed the bus,” he said after the free. “They changed the schedule. It was every 10 minutes. Today it was every half-hour. I was late getting here and never caught up. I never felt comfortable in this building. I didn’t feel my inner peace, I didn’t feel my aura. Inside I was black.”

Quotable Weir’s mouth has made him a favorite with journalists. Never one to hold back what is on his mind, he once described a competitors program as “a vodka shot and a snort of coke kind of thing,” a quote that got him in trouble with U.S. Figure Skating. “I don’t worry about what other people think,” he also said. “Everyone else worries for me.”

• Become a fan of Weir on Facebook at www.facebook.com/johnnygweir/

A wrapup of the ladies short program