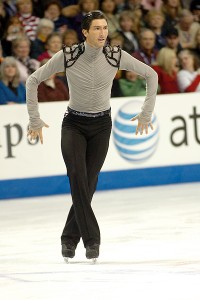 COLORADO SPRINGS, Colo. — U.S. Figure Skating announced today that 2010 Olympic champion Evan Lysacek will participate in the Smucker’s Skating Spectacular held on the final Sunday of the 2011 AT&T U.S. Figure Skating Championships at the Greensboro Coliseum in Greensboro, N.C. The Spectacular will be taped on Sunday, Jan. 30 for broadcast on NBC Saturday, Feb. 5 from 2:30-4:30 p.m. ET.

Following the Smucker’s Skating Spectacular, ticket holders will be invited to remain in the arena for the taping of two uniquely choreographed performances that will be broadcast as part of the U.S. Figure Skating event RISE, on February 17. Randy Gardner, 1979 World pairs champion and choreographer on the television show “Skating with Celebrities,” will choreograph both special skating pieces for RISE, including the exhibition by Lysacek.

As an official spokesperson for RISE, Lysacek will be in Greensboro during the Championships to promote the February 17 event by skating in the Spectacular and filming his RISE exhibition performance.

Tickets for the Feb. 17 event are available at participating theater box offices and online at www.FathomEvents.com. Theaters and participants are subject to change.

The U.S. Figure Skating Championships, held annually since 1914, is the nation’s most prestigious figure skating event and one of the most televised and most-watched annual sporting events in the country. The 2011 event will take place at the Greensboro Coliseum Complex, where all three major components of the event–competition, practice and FanFest–will be featured under one roof.