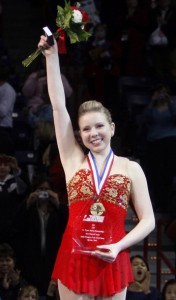 Portland, MAINE – Global sports and entertainment marketing leader Octagon today announced the signing of Olympic figure skater Rachael Flatt to a full representation agreement. Flatt, who was a member of the U.S. Olympic team at the 2010 Winter Games in Vancouver, is the reigning U.S. National Champion. She will be competing in the 2011 U.S. Figure Skating Championships that will take place this week in Greensboro, N.C.

“I’m very excited to be working with everyone at Octagon,” said Flatt. “Their experience with managing and marketing Olympic athletes speaks for itself and I am looking forward to working with them as I enter this next phase in my career on and off the ice.”

“We are thrilled to add Rachael to our client list, she is not only an incredible athlete but also a very bright individual who has a tremendous amount to offer beyond her sport,” said Janey Miller, Octagon’s Vice President of Olympics. “We look forward to helping her explore many opportunities in and around skating as she studies at Stanford and prepares for the 2014 Winter Olympics.”