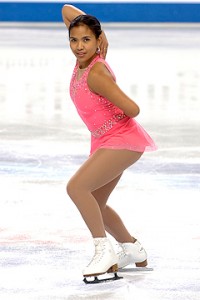 Melissa Bulanhagui, who won the bronze medal for the United States at the 2010 Nebelhorn Trophy, announced today that she will represent the Philippines, the birth place of her parents, in future competitions. She will make her debut at the Philippines National Championships in November with a goal of competing internationally after the 2011-12 season.

“Thank you U.S. Figure Skating for everything and all the opportunities you have given me,” tweeted Bulanhagui, who plans to continue training in Newark, Del. “It was my honor to represent you.”

She won the silver medal at the 2005 North American Challenge Skate (Kansas) and the junior ladies title at 2006 Gardena Spring Trophy. On the 2006 Junior Grand Prix circuit, she was second in Romania, fourth in the Czech Republic and fourth in the Final. She placed fifth at JGP Bulgaria the following season. In 2008, she won the Italy event then placed ninth in  Belarus.

Her only senior international experience came at 2010 Nebelhorn Trophy, where she took home the bronze medal for Team USA.