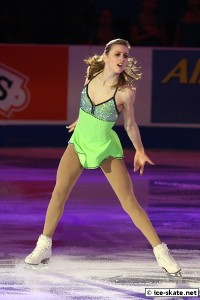 Ladies
The ladies competition in Brasov features many top skaters but Russian Polina Shelepen is clearly the favorite. Earlier this season, she won the opening JGP event in Latvia, setting a personal best 105.48 points in the free skate. Shelepen, who won two events on the JGP last year, set her personal best short program score (59.54) and total score (159.29) last season at the Final where she finished fifth. She was seventh at World Juniors.

While Shelepen is the favorite to take home the gold, she will face tough competitors including Japan’s Yukiko Fujisawa and and Yuki Nishino.  Nishino won a bronze on the JGP last season while Fujisawa is looking for her first medal. Their personal best scores are relatively similar with Fujisawa scoring 149.28 points at 2010 JGP Great Britain and Nishino scoring 149.42 at 2008 JGP Final.

Other podium contenders are Polina Korobeynikova of Russia who finished fourth in her JGP debut in Australia, Cain (Coppell, Texas) of the United States who finished sixth in her JGP debut in Latvia and Hae-Jin Kim of Korea, who won the short program at JGP Australia but placed fifth overall. Kim is especially one to watch, as she increased her personal best by a whopping 51 points in Australia despite a shaky free skate that doomed her medal chances.

Daniels (Springfield, Ill.) is not expected to figure into the medals in what is her first international competition. Last season, she was second in the junior ladies competition at the Midwestern Sectional Championships and won the pewter medal at nationals.

The race for gold, silver and bronze should be exciting but Shelepen is the most polished and the most experienced, giving her the edge. Podium predictions: Polina Shelepen, Russia. 2) Yukiko Fujisawa, Japan. 3) Yuki Nishino, Japan.

Men
Japan’s Ryuju Hino is the favorite in Romania following a golden performance at the opening event in Latvia, where he increased his personal best by 30 points. If Hino can replicate his score of 182.71 points, he should easily take home his second JGP title and qualify for the season ending Final.

Dong-Wong Lee of Korea is another skater who has made great strides this season. He finished 30th at the 2011 World Junior Championships, but placed fifth at JGP Australia. He is looking to win his first JGP medal in Romania.

Hino should easily win the competition but with so many competitors improving their personal bests by 20 or more points already this season, no skaters can be counted out of the medals. Podium predictions: 1) Ryuju Hino, Japan. 2) Dong-Won Lee, Korea. 3) Harrison Choate, United States.

Ice Dance
The ice dancing event in Romania features one of the most interesting match-ups of the season, Russians Alexandra Stepanova and Ivan Bukin facing Ukrainians Anastasia Galyeta and Alexei Shumski. Stepanova and Bukin have a much higher personal best than the Galyeta and Shumski (130.08 points to 124.65) but should be challenged by the Ukrainians if they rise from a recent slump. They could also be challenged by Irina Shtork and Taavi Rand of Estonia.

Stepanova and Bukin won two gold medals last season, claiming the JGP events in France and Japan, then took third at the Final. With a fourth place finish in the junior event at Russian nationals, they were left off the 2011 World Junior Championship team.

Galyeta and Shumski had a great season last year, qualifying for the Final with a silver in Romania and bronze in Czech Republic, but were only 13th at the World Junior Championships. They have already won a silver this season. But the Ukrainians scored less than their personal best in Poland when they were expected to far surpass that mark.

Shtork and Rand have a great shot at winning their first medal in Romania. They finished eighth in Austria and sixth in Great Britain last season then placed 10th at World Juniors.  Against the young field here, they have one of their best shots at climbing into the upper ranks at the junior level.

Stepanova and Bukin should easily win but how close the competition comes to them could be concerning in their bid for a spot on the World Junior team. Podium predictions: 1) Alexandra Stepanova and Ivan Bukin, Russia. 2) Anastasia Galyeta and Alexei Shumski, Ukraine. 3) Irina Shtork and Taavi Rand, Estonia.