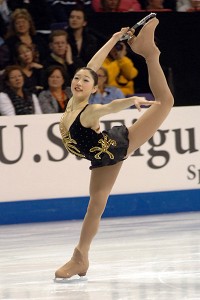 Nagasu’s toughest competition should come from Russian Ksenia Makarova, who had a solid 2010-11 season, taking home the silver medal from her Grand Prix debut (Skate Canada), finishing fourth at Europeans and seventh at Worlds. She spent the beginning of the 2009-10 season on the Junior Grand Prix, winning two medals, and went on to place ninth at the European Championships, 10th at the Olympics and eighth at the Worlds.

Elene Gedevanishvili of Georgia is an extremely unpredictable skater who has always lacked consistency, which makes her a question mark for every competition she enters. She was notably third at the 2010 European Championships but she finished that with a 14th place showing at the Olympics and an 18th place showing at Worlds. Gedevanishvili was consistently among the middle of the pack in the 2010-11 season, placing sixth at the NHK Trophy, seventh at Skate America, eighth at the Europeans and 10th at Worlds.

Other contenders include German Sarah Hecken and the Swedish sisters Joshi and Viktoria Helgesson. Hacken was 11th at the 2011 World Championships, J. Helgesson was 15th and V. Helgesson was 17th.

Forte (Merrick, N.Y.) is competing internationally for the United States for the second time at Nebelhorn Trophy after attempting to compete for Azerbaijan 2009-10, which caused her to sit out the entire season. She returned to competition for the United States in the 2010-11 season, finishing ninth at the U.S. Championships and fourth at Gardena Spring Trophy.

The ladies short program is Friday and the free skate is Saturday.