The 2017 Four Continents Championships concluded with one of the most astounding displays of jumping prowess the sport has ever seen as some of the top male skaters in the world dazzled the crowd with high-flying quadruple jumps.

In a rare upset, 2017 U.S. Champion Nathen Chen beat out 2014 Olympic Champion Yuzuru Hanyu for the gold medal while becoming the first man to ever land five quads in a free skate in international competition. Skating to “Polovtsian Dances,” Chen attacked every second of his program, which began with four quads jumps in a row, bringing the crowd to its feet and earning him an incredible 56.88 points from those elements alone. Chen ended up receiving a grand total of 307.46 points for the event, narrowly edging out Hanyu by less than four points. With his victory Chen becomes the first American man to win Four Continents since Adam Rippon in 2010.

“This feels great, honestly,” Chen said of his performance. “This is the first championship event that I’ve won. I had a good lead coming out of the short program, which really benefitted me in the long program. I tried five quads today and I landed three of the five solidly. The other two were a little shaky, so that’s something that I need to improve on for Worlds. It’s great to be at the Olympic venue and I really enjoyed my time here.”

It is a rare day when the defending Olympic champion can land four quads, win the free skate, and still come up short, but that is what ended up happening to Yuzuru Hanyu who had to settle for the silver medal in Gangneung with a total competition score of 303.71 points. Hanyu came into the free skate in third place but moved up to second after skating a season’s best to “Hope and Legacy,” by Joe Hisaishi. Despite being bested by Chen in this event, Hanyu will have a chance at revenge at the World Championships in Helsinki in March, where he will also be facing training partner and defending champion Javier Fernandez.

“My free skate today was a challenge for me,” Hanyu stated. “My priority in this competition is to land four quads in the program and to solidly land the triple axel combos. I feel frustrated to make the same mistake on the quad salchow again, but after the short program I spent quite some time practicing it, and I think I already found the entry and position to land it more consistently, so I will further improve it through training.”

Although he opened his program with a beautiful quad loop and flip, 2015 World Junior Champion Shoma Uno was unable to capitalize on his triple axels, falling on both and effectively putting himself out of gold medal contention. Uno skated to “Buenos Aires Hora Cero” and showcased his trademark intensity and smooth skating skills en route to a total score of 288.05 points, which secured him the bronze medal.

“The first half was great. I felt happy to land the quad loop, which I still cannot land consistently in training,” Uno said. “As for the second half, the mistakes on the triple axels were not because of exhaustion but because I lost my focus. I am very consistent with my triple axel, so when I entered the jump, I thought, ‘I can land it, no problem,’ but the moment I took off, I realized something went wrong.”

Despite not landing a quad, Team U.S.A.’s Jason Brown was able to capitalize on other skaters’ mistakes to rise in the standings. Brown was shaky on several of his jumps, including his triple loop and triple lutz and he singled a planned double axel. His total score for the event was 245.85 points, good enough for sixth place.

“This was a huge growing experience from nationals to here,” Brown said following his free skate. “I feel so much stronger. I definitely improved certain aspects of the program.”

Grant Hochstein also had a difficult jumping night, singling his second triple axel and putting a hand down on his first quad toe loop. Hochstein’s total score was 235.72, putting him in 9th place and ensuring that all of the U.S. men were inside the top ten for the competition.

“I think this is probably the second-best competition I’ve had all season,” Hochstein said. “I was more prepared than I was for nationals, and my short was better. The long wasn’t quite as good. I’m proud of myself for getting up after missing the triple Axel and doing the quad toe right after today. I’m just going to build on this for next season.”

Chen and Brown will be representing the United States in Helsinki, Finland at the World Championships, which will begin on March 29th. 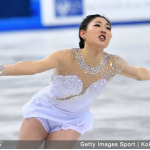 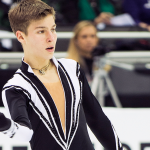