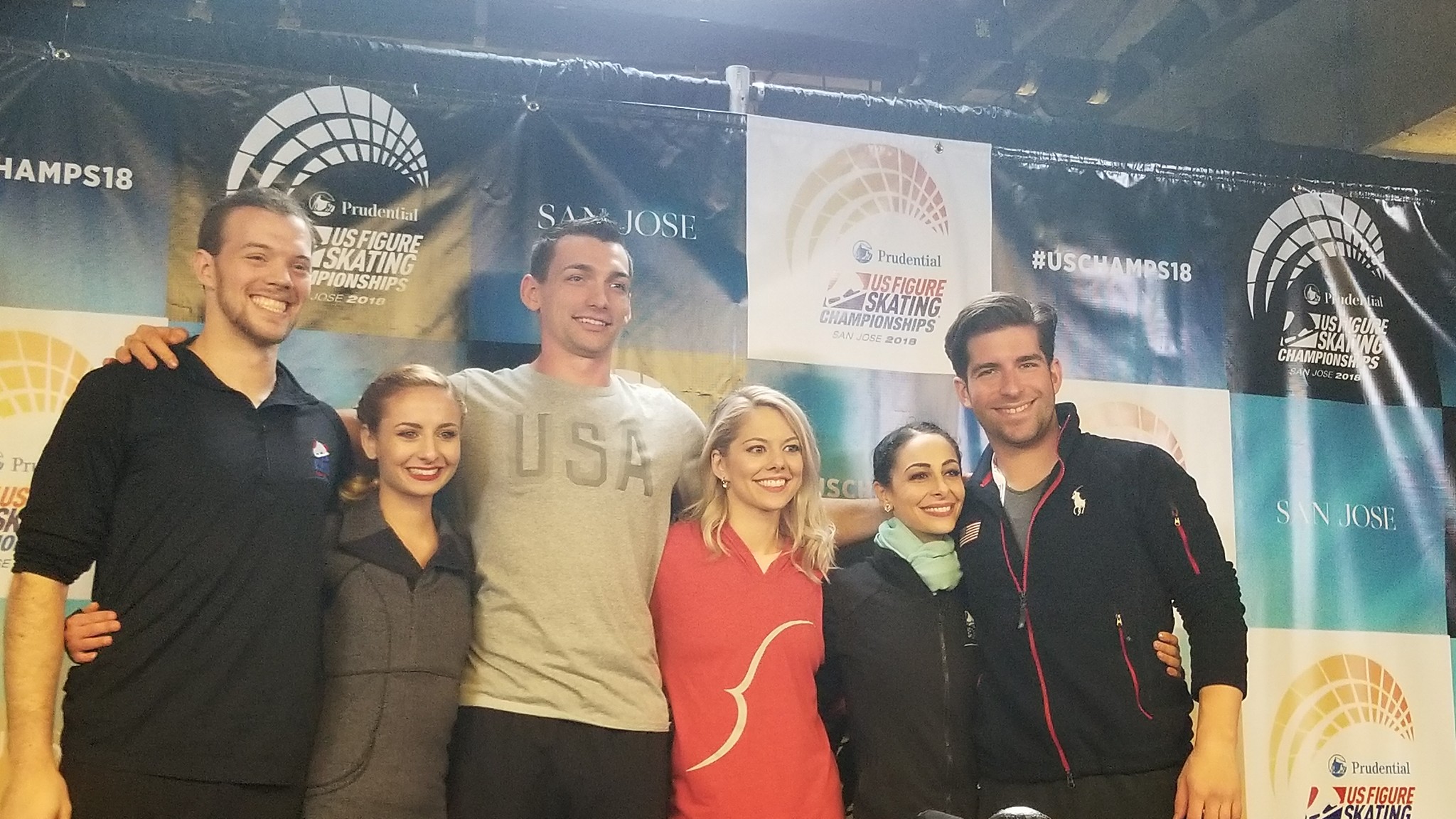 For the American pairs, this year’s U.S. Nationals has a different feel than other recent national championships. The United States has only 1 pairs slot for the Olympic team this year, instead of its customary 2 slots, which changes the dynamic of the competition. Perhaps as a result, we saw some unexpected results in the pairs short program at U.S. Nationals Thursday afternoon.

Alexa Scimeca-Knierim/Chris Knierim won the short program as expected, but their victory didn’t come without a fight. The Knierims started their “Come What May” short program with a terrific, high triple twist, but then had problems on the side-by-side triple Salchow. Chris turned out of the jump, costing them some negative quality, or grade of execution (GOE), marks. Then there was a shaky moment going into the throw triple flip, as Alexa’s heel grazed Chris’s pant leg on the entrance. The audience gasped as Knierim slipped slightly. But Scimeca-Knierim gamely hung on to successfully land the throw. The Knierims closed with a strong lift and death spiral to score 71.10 for 1st place.

Despite the miscues, the Knierims were happy with their performance and the result. “Everything is coming together,” said Chris Knierim afterward. “We’re both feeling 100% in training. So we’re just very happy. It’s been a long two years,” he said, referring to Scimeca-Knierim’s recovery from abdominal surgery.

Although the couple are seen as favorites for the sole Olympic slot, Knierim said they’re not taking anything for granted. “We can’t just come in here and have two bad skates, get 3rd place or 4th place or off the podium, and still feel confident” of being named to the team, he said. “If you’re going to an Olympic Games, you need to go in high, and you need to go in confident, and so that’s what we plan to hopefully do this week.”

The Knierims expect to go for the quad twist in the pairs free skate on Saturday. “We want to highlight our strengths,” explained Scimeca-Knierim. “Whether the point advantage [of the quad twist] is big or not, that twist is ours, and it’s something we’re known for, so we want to capitalize on that. No team is perfect at everything, so I think you have to highlight the things you’re really good at. It’s unique, and it’s an advantage for us to do it.”

Just recently back from a serious knee injury, Tarah Kayne/Danny O’Shea didn’t come to Nationals with a lot of momentum. However, the 2016 National champions turned in a great performance in the short program. They hit solid side-by-side triple Salchows, then landed a good throw triple Salchow out of a difficult choreo lift. Not only that, they connected strongly with the audience, really conveying the emotion in their “All I Ask of You” Phantom of the Opera SP. Kayne/O’Shea earned 68.93 to place 2nd.

Kayne/O’Shea said they were very pleased with their program. “It’s really nice just to get off the ice feeling good about ourselves. We’ve both been struggling with that,” said Tarah Kayne, referring to the knee injury that kept them out of competition this fall. “We were going to competitions, all last season, and getting off the ice and feeling disappointed. I was really, really injured, and we weren’t able to put in the training that we needed to do. Just in the last few months, we’ve really been able to start training again after the surgery.”

The couple revealed that Kayne’s recovery from surgery didn’t go exactly as they had originally hoped. When she first returned to the ice, four months after surgery, she was still in great pain and could not do difficult jumps. At that point, said Kayne, “The medical staff said they thought it was best for me to get off the ice and stay at the Olympic Training Center and get more physical therapy and work with the strength trainers. That was a really low point for us, because we didn’t know: Is it going to be for a few weeks or a few months or the rest of the season? Am I going to be able to skate?”

Kayne/O’Shea feared they might lose the entire season. But fortunately, Kayne was able to return to the ice after a further month and a half of therapy at the Olympic Training Center. The couple admitted they were very nervous for their first event this season (Golden Spin of Zagreb) and were happy to skate much better here in the short program at Nationals.

Coach Jim Peterson said he wasn’t surprised by Kayne/O’Shea’s success in the short program. “I told them, You’re taking your history on the ice. This isn’t just a few months of training. You’ve been skating together for years, you have a full body of work. That never leaves,” he said. “So I thought that was out there with them today. They love Phantom of the Opera. I don’t care what anyone says–they love it, I love it, I stand by it. And I think they skate with their heart. I think obviously there’s room for improvement in certain areas, but I couldn’t be more pleased.”

Deanna Stellato/Nate Bartholomay, also coached by Peterson, returned to their “Hallelujah” SP in San Jose and repeated their success from last year’s Nationals with the program, placing a strong 3rd. Stellato/Bartholomay hit a nice triple twist and very good side-by-side triple toe loops. Their throw triple loop was just a bit forward on the landing, but received no negative GOE. All of Stellato/Bartholomay’s elements were solid; their GOE marks were almost all positive. Their step sequence was particularly good, with strong edges and good speed. Stellato/Bartholomay earned 67.84. It was easily their best short program of the season.

Afterward, Stellato/Bartholomay discussed the decision to return to “Hallelujah” after starting the season with a different “Eleanor Rigby” short program.

“All season, we worked on the ‘Eleanor Rigby’ program,” said Bartholomay. “It was good —we think [choreographer] Rohene Ward did a fantastic job. But we just couldn’t find it within ourselves to get that pop for the second mark [PCS mark].”

“’Eleanor Rigby’ is such a depressing song, that you kind of don’t know what to do with your facial expressions during it,” said Stellato. “We loved the music–the violin was pretty.”

But something didn’t feel right. Coach Jim Peterson, who had suggested earlier that they keep “Hallelujah,” raised the topic again. Stellato/Bartholomay decided to make the switch right after Skate America.

“I really did like the program Rohene did for them,” said Peterson. “This was just, to me, a little bit more of a smoother, calmer piece of music that I think allowed them to go through the elements a little bit more methodically. And I also think it has great punch at the end. I think both programs were excellent. I just think for right now, for them, this was the best choice.”

The decision worked out well on Thursday. Peterson said he was happy with Stellato/Bartholomay’s performance. “With Deanna and Nate, it’s [program] components—building on that area—and the consistency, and the bigness of the elements. Like the twist and the throw. I thought we achieved that today. I’d like to see their twist a little higher, because it has the potential of being higher. But it was good today. It’s nice to see Deanna feel at home in the competitive arena again. I could see it on her face. She really felt the joy of skating today. So that was exciting for us.”

Defending national champions Haven Denney/Brandon Frazier placed 4th in the short program due to problems on their side-by-side triple Salchows. Frazier doubled the jump, while Denney had a slight spinout. It was the only error in an otherwise strong program. Denney/Frazier hit a lovely, high triple twist and terrific throw triple loop (both elements received very good GOE marks). Their step sequence was also very nice, smoothly performed and with much of it in hold. Denney/Frazier scored 63.63, about 4 points behind the leading teams.

Chelsea Liu/Brian Johnson put out a strong short program in their second senior Nationals. Johnson turned out of their opening side-by-side triple Salchows, but the rest of their elements were well-done. They were the only pair to be credited with a level 4 triple twist, and their throw triple Salchow and star lift earned good GOE. Liu/Johnson scored 62.35 for 5th. Afterward, the couple said they were pleased with the program.

“We performed what we wanted to,” said Liu. “Our main focus has been to bring our performance level to the senior level, to show we’ve matured in our artistry. And I think we did a pretty good job.”

Johnson added that they’re focused on connecting with the audience.

Liu agreed. “We’re really here for the audience, and for ourselves to have fun. We hope we can do everything, all of our elements.”

Defending National silver medalists Marissa Castelli/Mervin Tran had a few technical issues in their short program. Their level 3 triple twist was completed but received some negative GOE, which held down their overall score for the element. Then Castelli fell on their side-by-side triple toe loops, and the jump was downgraded, earning only .70 points. Castelli/Tran’s throw triple Salchow was good. However, their PCS fell a bit behind the top teams. They earned 60.75 for 6th place, and will no doubt be looking to pull up in the long program.

Jessica Pfund/Joshua Santillan had their best short program yet at U.S. Nationals to place 7th. They had a low catch on the opening level 2 triple twist, which cost them some negative GOE. However, they made up for that with good marks on their throw triple loop and side-by-side triple Salchows, both of which were nicely done. They also had good coverage on their star lift. It was a very good performance overall for the Florida pair, and they earned 60.52.

Last year’s National bronze medalists Ashley Cain/Timothy LeDuc unexpectedly struggled in their short program, placing 8th. The couple looked a bit off in this routine. Their triple twist was only level 1, with negative GOE. Cain put a hand down on the throw 3F, and LeDuc fell on the side-by-side triple loops. However, they did have the highest-scoring step sequence of the afternoon; this sequence allows them to show off their musicality, unison, and strong edges. Cain/LeDuc scored 60.03.

New senior team Nica Digerness/Danny Neudecker had a good debut short program. They hit a clean set of double Axels and a fine throw triple toe loop. Their other elements were completed, but not at the highest quality level, receiving scattered negative GOE. They earned 53.78 for 9th.

New team Winter Deardorff/Max Settlage rounded out the top 10, earning a score of 51.15.

The U.S. pairs will take the ice again on Saturday for the free skate at U.S. Nationals. 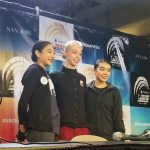 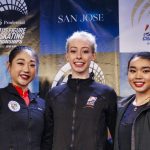