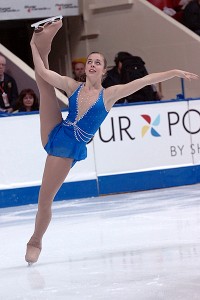 The podium is in sight for Ashley Wagner at the World Junior Championships in Sofia, Bulgaria. She finished second in the short program with 57.50 points.

“I felt that it was a very good program for me. I had not skated my best short program at nationals so mentally this was one of the harder programs for me,” Wagner said. She finished 12th in the short program at the U.S. Championships but won the free skate.

Her program in Sofia featured a triple flip-double toe combination, a double Axel and a triple lutz, although the jump received a negative grade of execution for the wrong take off. The national pewter medalist picked up a Level 4 for her layback and combination spin, and the flying camel spin and straight line footwork were graded a Level 3.

“I took it one step at a time and I stayed focused on the element that I was approaching and for the most part I feel like that worked for me and I am very satisfied with my program. I’m going to enjoy tonight and not being nervous,” she said.

Wagner competed at the World Championships last year, finishing 16th in her senior World debut. “”I came here because I did not qualify for worlds, and I want to collect some world ranking list points here in order to get two senior Grand Prix next season,” she said.

Wagner is behind 2006 Olympian Elene Gedevanishvili, who trains in New Jersey but competes for her native Georgia. Gedevanishvili set a personal best with 60.32 while Russian Alena Leonova took third with 55.50.

American Katrina Hacker is in fifth place with 51.06 points. She turned in a clean but easier program that included a triple toe-double toe combination and a double lutz.

Caroline Zhang, who finished third at the U.S. Championships, performed her signature step sequences and spins but they were not enough to help her overcome a poor jumping performance. She is in 10th place after she fell on her triple flip, and could not complete the second jump in the combination.

Zhang (47.64) had both her flip and triple lutz downgraded to doubles.

In the ice dancing competition, it was another dominating performance by rising American stars Madison Chock and Greg Zuerlein. The couple swept all three phases of the competition to win the World Junior Championships by more than 10 points.

Chock and Zuerlein’s skate to “The Phantom of the Opera” was highlighted by a straight line lift, a straight line-rotational lift and intricate footwork. The technical panel graded the lifts, the twizzles and the combination spin a level four and the two step sequences got a level three. The Junior Grand Prix Final Champions received 82.11 points for the free dance, which helped them to a total of 172.55 points.

“We are overwhelmed. It feels so good. We’ve worked so hard. I think it was a very good performance for us. We connected very well with each other starting from actually the beginning of the day. We kind of got our heads together and focused on what we had to do. It came through and it was solid. We just wanted to try to give our best performance to show what this dance can really do”, Chock said.

The Shibutanis were awarded a Level 4 for the lifts, twizzles and spin and a Level 3 for the step sequences. They scored a new personal best of 80.34 points to finish with total score of 162.15.

“We are really very excited, because this is our first year on the international scene. We’re happy with how we skated all week,” Maia Shibutani said.