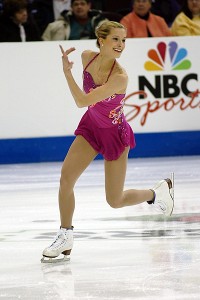 The two American entrants in the ladies competition at the NHK Trophy have very different roles. While Ashley Wanger is among the medal favorites, Becky Bereswill is the newcomer, making her debut on the Grand Prix circuit in Nagano, Japan.

Wagner is a Grand Prix veteran, having made her debut by placing fifth at 2007 Skate Canada. She has two medals in her collection, a bronze from 2007 Trophee Eric Bompard and a silver from the Rostelecom Cup held last month in Moscow, Russia.

With another medal winning performance in Nagano, Wagner could qualify for her first Grand Prix Final, which would boost her chances of being one of the two women selected for the 2010 U.S. Olympic team.

NHK Trophy is the only Grand Prix assignment Bereswill received.

Among the international competitors in Nagano are Rostelecom Cup Champion Miki Ando of Japan and bronze medalist Alena Leonova of Russia. Ando is the 2007 World Champion while Leonova is the 2009 World Junior Champion.

Also competing is Yukari Nakano, who has record three top-five placements at Worlds.

The ladies short program is scheduled for 7 p.m. local time at the Big Hat arena on Friday. The free skate is Saturday starting at 6:45 p.m.