For Alexa Scimeca-Knierim and Chris Knierim, the road to the 2018 Pyeongchang Olympics hasn’t always been easy. But the U.S. national champions are thrilled to be heading to South Korea soon to start their Olympic experience. They shared their thoughts on a conference call with journalists this week.

“We see the light at the end of the tunnel, knowing that we’re leaving in just a few days now to go to our biggest dream ever,” said a buoyant Alexa Scimeca-Knierim.

The Knierims believe they’re ready to peak in Pyeongchang and put out strong programs at the Olympics. “For the most part, Chris and I really thrive and hit our stride in the second half of the season,” Scimeca-Knierim said. “It does take us a little bit to get our momentum and iron out things. I feel like we will peak at the right time. And we’ve just been very focused and working hard and doing our best.”

The Knierims will be the sole American pair in Pyeongchang. As such, they will compete in the short and long programs in both the team and individual pairs events. In all, they’ll be competing 4 times in a 7-day period. However, the couple is unfazed by this challenge.

“We’re both really excited,” said Chris Knierim. “With the team event, we have the opportunity to compete two more times in front of the world. So we’re very excited. A lot of people have asked, ‘Are you going to be really tired?’ or ‘Are you nervous about doing so many programs in a week?’ And the answer to that is: No. We do that many programs in a week, anyway. So it’s not a huge difference, in that aspect. We’re just so excited to be able to go and compete in front of the world on that stage.”

The Knierims plan to perform their signature element, the quad twist, in the free skate in both the team and individual events in Pyeongchang. “We’re going all out,” said Knierim. “We’re [doing] quad in both programs.”

“That’s right! We aren’t holding back,” confirmed Scimeca-Knierim. “As athletes and competitors, we want to continue to improve. And in training, our quad twist is pretty fluid and has good flow. We were very disappointed with the one we executed at U.S. Nationals because of the 2-foot landing. If anything, we’re looking forward to the opportunity to personally redeem ourselves, in our own minds, and do a better one at the next competition.”

The Knierims look forward to arriving at the Olympic Village in Pyeongchang. The couple does not yet know if they’ll be able to share a room in the Village or if they will be assigned to room with other athletes from Team USA. “We go through team processing when we arrive, and then we head to the Olympic Village after that,” explained Scimeca-Knierim. “And we will be told who our roommates are and what our room assignments will be when we get there.” 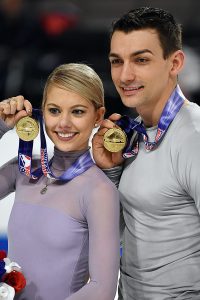 Scimeca-Knierim said they’ll be comfortable either way. “We’ve traveled a ton in the past with our teammates. And if we are separated and are with other skaters, it’s going to be great. We’re going to be in the Olympic Village, and I don’t think anything could be wrong about it. However it ends up, we’re just going to be excited and grateful.” She said that a lounge area will be available for the athletes, with games and music. They look forward to spending downtime there with teammates.

The couple also feel confident about the dietary options that will be available in Pyeongchang. “The Village is going to have a separate cafeteria that has standard American food,” Scimeca-Knierim said. “But the United States Olympic Committee (USOC) and the United States Figure Skating Association (USFSA) have put together their own area with a kitchen [and] food for the athletes. We’re going to be utilizing that during the competition time, because there’s going to be [fewer] athletes in and out there, and that’s going to help us avoid picking up any current flus or illnesses that may be going around the Village. They have spoken to the athletes individually, asking if there’s anything they specifically need. It’s definitely something they’ve put a lot of planning into. It really does put us at ease.”

After their part of the competition is over, the couple will try some Korean cuisine, as well as the other cafeterias in the Olympic Village. Scimeca-Knierim also wants some ice cream and french fries at McDonald’s, which is a sponsor for the Games. “But I’ll definitely have to wait until after I’m done competing,” she said, with a laugh.

The Knierims want to savor their Olympic experience, especially since they’ve had to overcome many setbacks over the past two years to reach this goal. Starting in spring 2016, Scimeca-Knierim experienced a serious abdominal illness that led to multiple surgeries and a lot of time away from competition.Then Chris Knierim suffered a knee injury. Sadly, he also lost both his father and uncle within the past year.

Knierim said that the grief of his father’s and uncle’s deaths will always be with him. But he carries on. “I’m doing good,” he said. “I have a great support system with Alexa and Dalilah, my mom, Alexa’s family. It’s been a long road, from the start of Alexa’s illness to both my dad and my uncle passing. It’s not been an easy year and a half or so. But I’m very lucky to be able to have Alexa, and all the people around me throughout all the hard times.”

As they stand on the threshold of their first Olympic Games, the Knierims’ thoughts are indeed much with their families, coach, friends, and support system. They know that this journey has not been theirs alone, and are grateful for the support of all who helped on the way.

Chris Knierim recalled how he originally started skating with his mother, DeeDee Knierim-Couch, who was a former competitive skater herself. “When I first started skating, my mom was my coach. And also my grandmother, my mom’s mom. When my mom was growing up, [my grandmother] was very involved in her skating. So she would coach me, too, in how to do a camel spin and things like that.”

Knierim’s mother helped start his pairs career. “I told my mom I wanted to do pairs, and at first she said, ‘No, it’s dangerous.’ Because she did pairs when she was younger, for a time. But then eventually, I convinced her, and we moved to Colorado. And I started working with Dalilah. And the rest is history.

“Through the years of growing up, she never made it about her not making an Olympics,” said Knierim. “It’s never been about that. Because when I started skating, she was my mother. She was not pursuing her dream of going to the Olympics through me. I know that she’s so happy for Alexa and I. And very supportive. And just happy for us to be in the situation. She’s going to the Games; I’m very excited that my mom gets to go. It’s just a mother and her son going to the rink.” 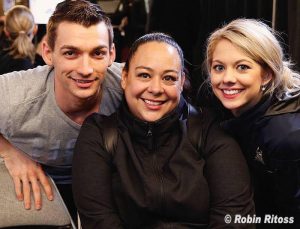 The couple also spoke of how close they are with coach Dalilah Sappenfield. They’re thrilled to take Sappenfield to her first Olympic Games as a coach.

“Dalilah is so important to us,” said Scimeca-Knierim. “For me, she changed me to being the athlete that I dreamed about being, before I moved to her. She got a handle on my mentality and was able to use the best qualities of myself in training. And through doing so, she helped me reach a lot of goals that I had really wanted to. But, putting that aside, she became like a second mother to me when I was sick. I’m in Colorado, my family is in Illinois, and Chris’s mom is in Arizona. So I didn’t have the family [nearby] when I was sick, going through all this turmoil and illness. And Dalilah really stepped up, and she took me on like a daughter. And she did not care about skating any more. She just wanted me to be healthy again. When you go through such a traumatic experience, you create a bond that is unbreakable.

“This is the lady who made us,” Scimeca-Knierim said. “She’s the lady who got us through sickness, through relationship issues—learning how to date and train together–before we got married. She’s really who everyone should be giving credit to. A lot of people congratulate Chris and I, because we performed. But honestly, without Dalilah being in the equation, I would not be successful in my own way.”

“I’ve been with Dalilah for 13 years or so now,” Chris Kneirim said. “Pretty much from when I started pairs. So I’ve seen all of her teams throughout the years, and she’s had multiple national champions. She’s been a coach at that level for a long time. Through my training—the 13 years—she’s had to help me out. Because I was working to pay for skating. So she’s helped me out financially, not being a stickler on paying for things. She’s a great coach, but she’s an better person. It’s something special to be able to take her to her first Olympics, because we’ve been together so long. And she’s been through so much with me in my personal life, aside from skating. So it’s an honor to be able to finally get her where she should have been a long time ago.”

The couple has asked Sappenfield to accompany them to get Olympic-ring tattoos after the Games. “And she wants to go with us!” said Scimeca-Knierim. “I don’t know if there are any other coaches who have gone with their skaters, to get their rings done. Maybe we’ll be the first. And honestly, sometimes, it’s not just our dream, but it’s also her dream. And when there’s tough days, we think about that. It’s not just Chris and I. Dalilah’s with us to the end. It’s all very much about her as well.”

Not only does the couple have great support from their coach and family, their friends are also excited   to see them go to the Olympics. Knierim has worked as an auto mechanic at several automotive shops in the Colorado Springs area, and he said his former colleagues and current friends have reached out to congratulate him.

“The last shop that I worked at—the owner of the shop knew that Alexa and I were competing to get on the 2014 Olympic team. So he was very supportive with my schedule [back then]. After we officially made the 2018 team, he actually messaged me, and said congratulations, and he’ll be watching. So that was kind of special,” said Knierim. “And I know a lot of my friends are going to be watching, and rooting for us.”

As the Knierims prepare for their trip to Pyeongchang, they know they won’t be going alone. Whether in spirit, or in person, their families, coaches, and friends will all be with them.